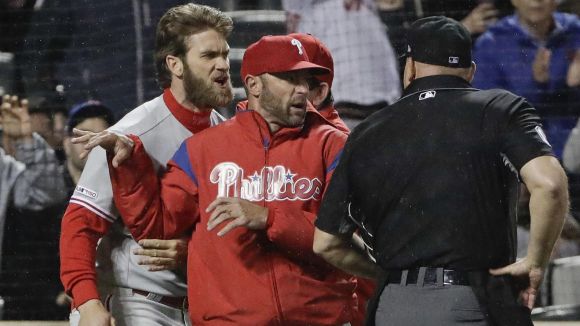 Well, it was bound to happen sooner or later.

Phillies fans will no doubt remember where they were and who they were berating the night Bryce Harper earned his first ejection with the new club.

Obviously, the dude who signed with Philly through his age 65 season is aware of MLB rules regarding the discussion of balls and strikes with an umpire, but this knowledge certainly hasn't stopped him from doing it before.

It's practically tradition at this point.

The Phillies were in New York taking on the Mets when things got a bit contentious after a rain delay.

Harper fanned twice against the legendary Steven Matz, taking particular exception to the second one:

Yeah, that was quite the scene, complete with an enraged Gabe Kapler, upon whom Bryce's ways are clearly rubbing off.

Of course, a few of those calls were egregiously bad, but you'll notice that this went down in the fourth inning, leaving five Harper-less innings.

This point was not lost on Phillies starter Jake Arrieta, who was left abandoned on the mound:

Hmmm, Jake doesn't seem to be one to mince words, speaking his truth in a rather morbid Philly locker room.

He's right, of course, as the Phillies are probably a better team with the former MVP on the field.

But that fuse is just so bloody short.

Perhaps Harper could find a community of people suffering from the same affliction.

Seems like we've seen this before, only with a player who was more expendable than Arrieta is now.