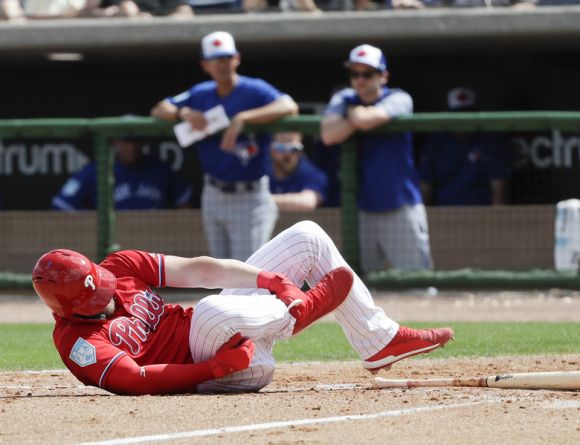 Those Philly fans sure are a fickle bunch, regardless of the sport in question.

Well, being real, they can be completely irrational, bordering on psychotic.

With legendary folk hero Bryce Harper safely in the fold until he reaches middle age, Phillies fans have embraced him as their own.

Of course, they were telling him to screw off literally moments before he officially signed with the team and ended his lengthy courtship, but that's totally irrelevant now.

This deranged fanbase can't protect him from the whims of Mother Baseball though, so Harper is subject to the same risks as other mortal ballplayers.

You know, like absorbing a 96mph fastball in the ankle during a meaningless exhibition game:

Dude, that probably smarts a bit.

Predictably, the City of Brotherly Love and criminal overreaction sprung into action, using the perfect vehicle for such things.

That would be correct.

Blue jays Trent Thornton getting death threats from Philadelphia fans because he missed his mark and hit harper pic.twitter.com/hgor0ADedi

@Trent_Thornton1 you messed with Philly today! You gonna get cut

Very little ambiguity there, either.

And here's a word from Trent Thornton, the most unfortunate Blue Jays pitcher who made the grievous error of missing his spot.

Blue Jays reliever Trent Thornton, who hit Bryce Harper on the top of the foot with a pitch, is getting crushed on social media and being threatened by "fans."

Thornton tried to go inside on a 1-1 pitch with a fastball, and "it slipped," he said.

Said Thornton, who hit Harper with the pitch: "Just kinda yanked it a little bit and it got away from me. Unfortunately it him. It wasn't intentional at all... My phone is blowing up right now. I have to deal with it. I hope he's okay. I obviously didn't mean to do that at all."

Thornton after hitting Harper: "I was amped up. It was the first time I've ever faced him. I wanted my stuff to be good. I threw a good curveball that he swung through. I was trying to set that up -- go inside, and like I said, unfortunately it got away from me."

A perfectly reasonable statement of fact, except in Philly.

Oh, and the X-rays were negative, so Harper should be just fine for Opening Day.