Bryce Harper Wears His Everyday Glasses during a Game 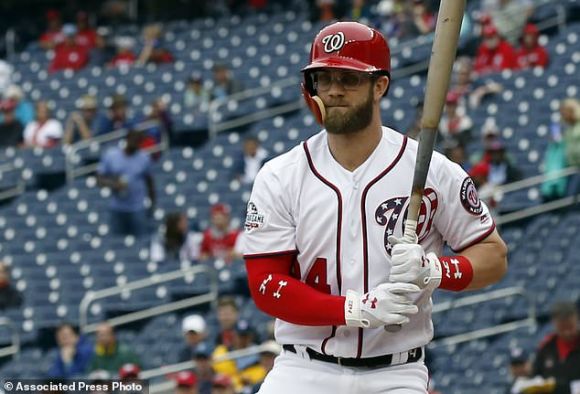 Bryce Harper is many things to many people.

Of course, his most obvious attribute would be his ability to play baseball at a really high level.

What evidence do we have of his fierce intelligence?

Those are some exciting frames.

Under normal circumstances, the Nationals star wears contact lenses while playing, but he couldn't get them in on this particular day against the Dodgers.

Haarper also sported some unique eyewear in the field.

I am very here for Bryce Harper wearing two pairs of unusual glasses in this game. pic.twitter.com/z5IRWdnkX9

This dude's the best.

Per custom, the Internet embraced this development with much enthusiasm.

Bryce Harper rocking glasses in hopes of finally being able to see what an NLCS looks like pic.twitter.com/Bga7WIavDN

While the specs are indeed both interesting and fashionable, they're also completely necessary and practical, as Harper is apparently more or less blind.

It's commonly agreed that hitting a baseball is one of the more difficult things to do, even with perfect eyesight, so Harper's well ahead of the curve.

In fact, he passed on the glasses in his second plate apperance and produced an RBI single, which was pretty heroic considering his handicap.

Btw, Harper said he couldn’t get his contacts in for this AB either, but he also wasn’t wearing glasses…. So he was basically blind and got an RBI single https://t.co/QItAR4tqXf

This just adds to the growing legend of Bryce Harper, although he might want to get a second opinion on those frames.

At press time, the endorsment deal with Gloria Vanderbilt had yet to be announced.