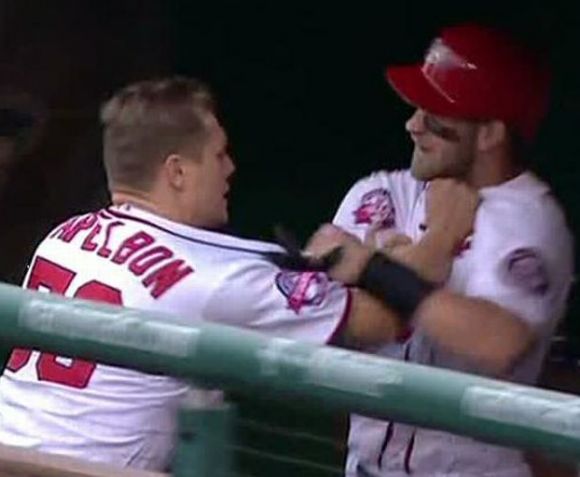 To date, there have been 23 times this season when it's been OK for Bryce Harper to jog to first base.

That's only because he was able to keep on jogging.

All the way around the bases.

His manager and teammates on the Washington Nationals like when that happens.

The issue is when it doesn't happen.

So far, it hasn't happened a lot this year. Harper's only batting .214 coming into the weekend, which includes an 8-45 July.

That's the sorta stuff where, in the words of DC's favorite Stanley Cup party dude, it's the suck.

So, take the pledge, Bryce:

As a matter of fact, the entire Nats roster should do it. Dudes are underachieving at a truly suckitudinous pace in 2018. They're 'way ahead of their usual post-season swoon to the extent that they may not even get there this time around.

Maybe that's why they're getting an early start on it.

So, if the Nats wanna unsuck, they oughta take another hint from the Caps and go balls-out on every play, because one just never knows what play might save a game and what game might be the difference at season's end.

Looking at you, Mr Kajillionaire-in-Waiting:

#Nats’ Davey Martinez to have conversation with Bryce Harper about lack of hustle on double play...

"That’s a conversation that Bryce and I will have tomorrow. He didn’t run that ball out the way I wanted to so we’ll talk about it tomorrow." - Martinez https://t.co/hJIYDa5Lds

It's not yet enough for Washington to bring back self-appointed hustle enforcer Jonathan Papelbon ...

Most of Harper's stats may be the suck right now, but those 23 bombs and the rest of his career override damn near everything else.

That would include his 100 punchies and counting, but today's game seems to ingnore those, anyway.

Still, manager Dave Martínez knows there's a time to jog and a time when it's not a very good idea.

Odds are he won't need to go all Papelbon on Harper, but that's not a look his club needs right now and No 34's gotta know it.

Fortunately, no jogging's required at the Home Run Derby, either.

If there was, they could always think about getting Papelbon to pitch to him.