And Now for Our Daily Call to Robot Umpire Arms 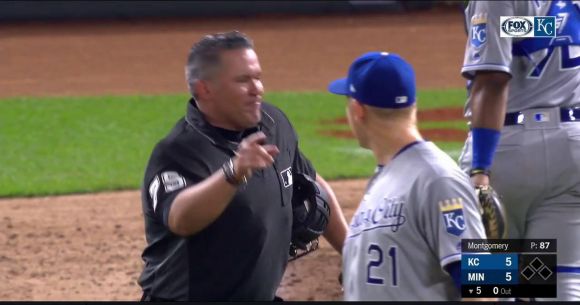 Well, we can add yet another voice to the growing chorus demanding an automated strike zone.

It's quite telling when a pitcher who'd previously been silent on the subject suddenly joins the robot revolution.

But that tends to happen when said pitcher gets dicked over on a bunch of calls.

Consider Mike Montgomery one of the freshly initiated.

The Royals' starter and dude who got the final out for the Cubs in the 2016 World Series was tossed in the fifth inning last night for exchanging pleasantries with home plate umpire Manny González.

I picked up "You're f***ing terrible" which I think was the key phrase in this Mike Montgomery ejection pic.twitter.com/BNBz9AMB5b

When a normally mild-mannered fellow like Montgomery loses his shit like that, something has definitely gone sideways.

He'd just allowed his third homer of the night to the Twins after being squeezed by Gonzo more than once.

That part at the end about the lack of accountability was telling.

Here's a bit more, including the request for automation:

Royals pitcher Mike Montgomery, who was ejected for the first time in his career, was not happy with home plate umpire Manny Gonzalez after the game. pic.twitter.com/je3L9caG36

The machines will be sentient very soon.