Bryce Harper Gets Ejected with an Assist from Technology 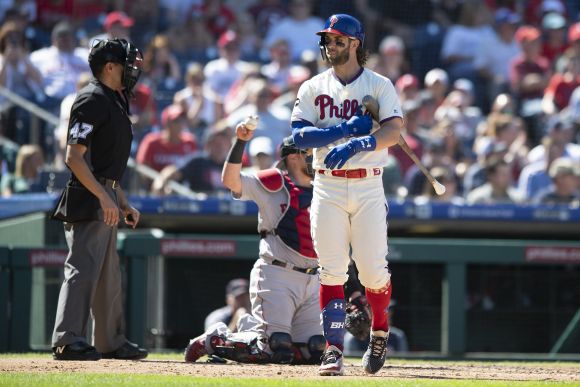 Video technology is all the rage in MLB these days, with both pitchers and hitters benefiting from intense film study and subsequent adjustments.

Apparently, this sort of thing can also be used to prepare a formal argument against a home plate umpire.

The passionate Bryce Harper, who's been known to flip out from time to time, recently used this method to gather evidence and ultimately present a case right in the middle of a game.

It was pretty ambitious of the Phillies' expensive outfielder to perform freelance paralegal work while playing ball, but to each their own.

That was an excellent clip, also featuring enraged manager Gabe Kapler, who was asked to leave as well.

It appears that fun-loving Gabe even channeled his inner Bobby Valentine and returned to the dugout at some point, sans fake mustache.

Harper obviously had a valid point about that called third strike, but what you didn't see in that clip was Bryce poring over the video to make sure it was a shitty call.

Once confirmed, he returned to the dugout and proceeded to berate Gabe Morales.

We're of the opinion that consulting the video beforehand was the mature thing to do.

Bryce Harper's message Sunday to home-plate umpire Gabe Morales: "You have to be better." Truer words couldn't be spoken about Harper and the fading #Phillies, whose playoff chances now stand at 0.8 percent. Story, via @phillyinquirer: https://t.co/0WIC0Zs733

And yes, that door does swing both ways.