ALCS: Yankees Use the Long Ball to Extend Their Stay 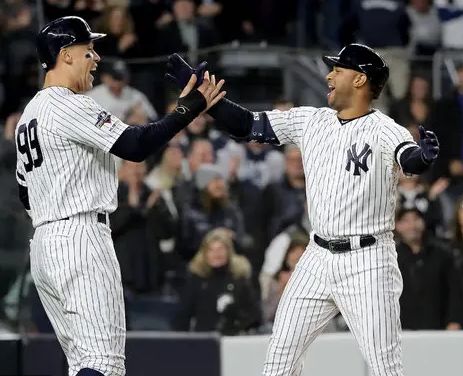 After an early burst of fireworks, this turned out to be a Big Maple sorta evening.

While virtually everyone else in Yankee Stadium was bundled up to combat the fall weather, James Paxton was out there in three-quarter sleeves, ready to Great White North it up and atone for his shortened start in Game 2.

Dude out-pitched Justin Verlander, with DJ LeMahieu and Aaron Hicks doing what Bronx Bombers do in support, and the Yankees lived to fight another day.

This one generated yet another of baseball's endless list of redheaded stepchild stats, filed under go to a game and see something you've never seen before.

In New York's 4-1 victory, all scoring happened in the first inning. This marked the first time ever in MLB playoff history -- and that covers all 1609 of them -- that this has happened.

Yankees fans could finally turn their jeers at the 'Stros into cheers for their pinstriped heroes.

Eight innings of tension -- hoping the lead can be held and elimination staved off for another day -- will create that kinda focus.

Verlander had been 4-0 with a 2.38 ERA against the Yankees in seven post-season starts, so that's a streak Aaron Boone's savages couldn't have stopped at a better time.

Now, it's off to Houston to see what else they can stop.