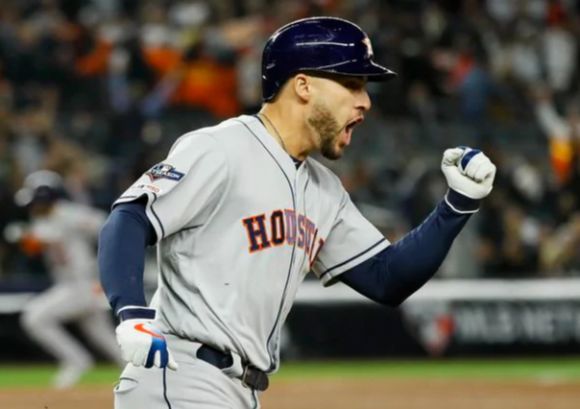 Seems the rainout did more than give Houston and New York pitcher an extra day to recharge.

An entire stadium of the Big Apple's brashest took advantage, too.

Yankee fans turned their worst intentions up to 11 in Game 4 of the American League Championship Series, but it was the Astros' bats that spoke the loudest when all was said and done.

Houston bashed the Bombers into submission, 8-3, to take a commanding 3-1 lead in this race to the World Series.

Zach Greinke did his part, too. Dude was the object of a good deal of that riducule, escaping a shaky first inning to subdue the Yankees on only two hits for the next three innings and change before giving way to a tag team of five 'Stros relievers.

After Greinke weaved and dodged through three walks and an Aaron Hicks single -- the free pass to Edwin Encarnación forced in the inning's only run -- Houston's bats came alive.

Both George Springer and Carlos Correa smacked 3-run blasts that put sufficient distance between themselves and both sets of New York savages, ie- the ones in the batter's box ...

Here is the full sequence of the Boone ejection. Hot mics galore. pic.twitter.com/R6Vw0qw0qn

Josh Reddick had complained of fans in the RF section tossing stuff at him during Game 3, and skipper AJ Hinch told the blue crew when he met them at the plate to exchange lineup cards for this one that he'd pull his team off the field if that sorta action continued.

Shades of Ducky Medwick and the 1934 World Series.

If a commissioner tried that in New York these days, odds are fans would keep hurling objects at the other team's stars until only subs were on the field.

As it was, Houston held serve in spite of it all.

Unless the Yankees stage a miracle comeback with a three-game winning streak, the Washington Nationals will play October baseball on the road under a roof instead of inclement Northeast conditions.

The weather can be kinda bad there this time of year, too.