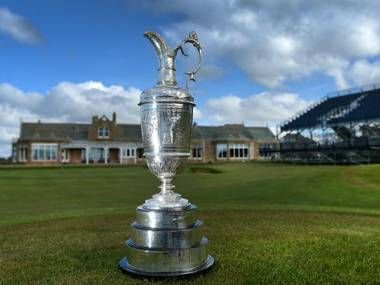 Here's an unfortunate reminder when it comes to coping with everyday life:

The Covid-19 pandemic is just the latest example of confirming this postulate in spades, and it's an equal-opportunity competence check.

It's not just the American and British governments who've totally botched damn near every aspect of handling the crisis, the Swedish government is just as much at fault for relying on a naïvely noble concept, and now they're paying more in cases and mortality than all their Scandinavian neighbors combined.

Fortunately for their own sake, both Wimbledon and the British Open had more sense than doing that.

They cancelled their 2020 events as opposed to postponing them like others were doing, hoping they'd have a shot at staging their extravaganzas later this year.

The All-England Lawn Tennis Club and Royal & Ancient Golf Club were taking no such chances. They simply pulled the plug.

That's because they were refreshingly forward-thinking and took out insurance policies to cover them in the inevitable instance that something like a pandemic would happen.

It's known that Wimbledon's paid a £2million annual premium over the past 17 years, which is is looking pretty damn good right now, especially as they took note of the SARS outbreak in 2003 and updated their policy to include infectious diseases.

While The Open's insurance details haven't been released, it's only known that the R&A has something similar.

The policy wouldn't activate until or unless the tournament was cancelled.

It is with a heavy heart that we have to cancel The Open for the first time since WWII. We appreciate that this will be disappointing for a great many people but we have to act responsibly during this pandemic and it is the right thing to do.
Statement: https://t.co/brJfuOZSFP pic.twitter.com/iizOupOk4m

Their policies won't match all their losses, but in Wimbledon's case, a £100million payout sure as hell beats a total write-off in a global economy that's likely gonna take a while to rebound, which will hit bottom lines even more.

Most other businesses have a clause included in the boilerplate section of their contracts known as force majeure, a catchy little French term for deep doodoo due to natural causes.

The sticking point in those deals are gonna be whether Covid-19 will be considered a natural cause. Its victims, for example, aren't having their death certificates reading natural causes. When lotsa dosh is involved, those on the line to pay out can get kinda picky about stuff like that.

Most pro sports clubs take out insurance policies on their players' contracts in case of debilitating injury like Tommy John surgery in baseball. The payout's usually 80%-90% of the deal.

So far, though, each player getting sick for a couple of weeks isn't enough to kick in a team's coverage. Odds are they're still gonna be in a position to perform according to the terms of their contract.

As to business interruption insurance, which many organizations have, most policies are tied to property insurance. Pandemics are rarely if ever mentioned.

The reality is pandemics happen. They're inevitable, as those who pay attention to history will confirm. One woulda thought that leaders responsible for keeping a country safe woulda taken note.

So, full marks to the OGs at the All England Lawn Tennis Club and the R&A for first taking note and then taking action.

Maybe they're on a lesser level than governments, whose bumbling has clearly cost lives ...

... but they're a shining example that at least someone is paying attention.

The irony here is that if any two sports could manage a way to manage social distancing, they'd be tennis and golf. However, those who administer their most prestigious tournaments took a hard look at all the logistics under the circumstances and packed it in.

What's that say about how daunting the challenge is gonna be for MLB, the NHL, MLS, and the NBA?