This Week in Vindictive Tennis Trolling: The Women's US Open Edition 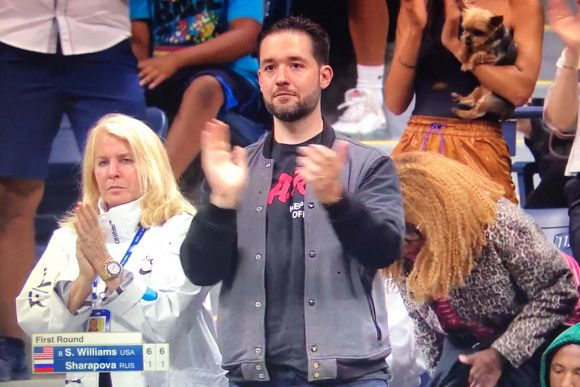 Despite the fact that Serena Williams routinely flogs Maria Sharapova on the court, the nastiness between them remains interesting.

The catty pair hooked up in the opening round of the 2019 US Open, with Williams laying waste to her Russian nemesis in under an hour with a 6-1, 6-1 straight set victory.

Perhaps US Open officials could've been a bit friendlier to Maria in regard to the draw, but we're sure they had their reasons for putting her directly in Serena's path so early in the tournament.

Of course, the somewhat ostracized Sharapova is certainly used to being screwed with by various tourney brass.

So is Serena, for that matter.

Anyway, while the match itself was completely bereft of drama, there was some spicy shit happening in the gallery.

It appears that Serena has now enlisted her husband in her quest to thoroughly break Sharapova both physically and mentally.

Have a look at the t-shirt that Alexis Ohanian chose to sport for the occasion:

Alexis Ohanian showing up to the match between Serena & Maria Sharapova in a D.A.R.E t shirt is the type of solidarity in pettiness I need from my partner. pic.twitter.com/iH1oBW8djO

Of course, this is a brilliant and cruel use of the failed DARE anti-drug program to twist the knife a bit more into Sharapova, referencing her infamous doping ban.

The Internet was quick to recognize this act of domestic trolling terrorism:

I’d like to report a murder 😂 @alexisohanian #renasarmy #usopen pic.twitter.com/RLtUNxZZVu

Waking up to news that Serena demolished Sharapova 6-1 6-1, her hubby on the stands wearing a DARE tshirt #USOpen pic.twitter.com/A08Bg7pAmh

Some are even interpreting this as a sign of a healthy relationship.

Twitter is already memeing this petty expression of love. https://t.co/wjKTx4no1d

Dare to be the kind of spouse that trolls your wife’s rival from the stands at the #USOpen. https://t.co/YicpwZ4sEi

We'll see ourselves out.