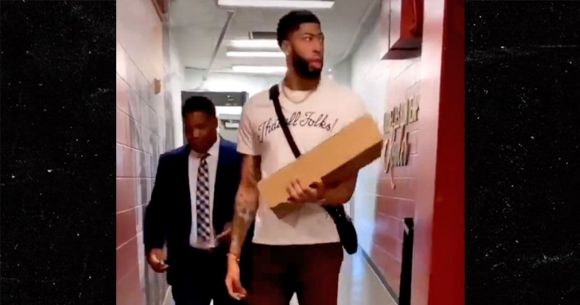 The relationship between the New Orleans Pelicans and their franchise player has reached new levels of toxicity.

Ever since Anthony Davis requested a trade back in January, things have gotten increasingly bizarre.

The Brow wasn't traded at the deadline, forcing him to stick around in NOLA for an extremely awkward couple of months, both playing and sitting out the string.

Well, the Pelicans' season mercifully came to an end earlier this week, but Davis seemingly decided to take a creative parting shot at his soon to be former team.

Now, we trust the intellect of our dear readership enough not to explain the humor here, but suffice it to say this is a world class troll job directed at the dysfunctional Pelicans organization and long-suffering fanbase.

However, the plot thickens.

When questioned about his T-shirt the following day, Davis denied the epic trolling that appeared to take place.

And you really need to hear this batshit explanation:

Now, it's perfectly feasible that the Brow has an army of personal assistants tending to his every off-court need, but actually hearing him say he doesn't pick out his own clothing makes him seem detached from reality.

Hey, let's ask Anthony how much a gallon of milk costs.

It was nice to hear Davis proclaim his love for Looney Tunes, though, which makes him aces in our book.

Anyway, regardless of what NBA city dude lands in, let's hope he becomes just a bit more self-sufficient.

You sure do, pal.