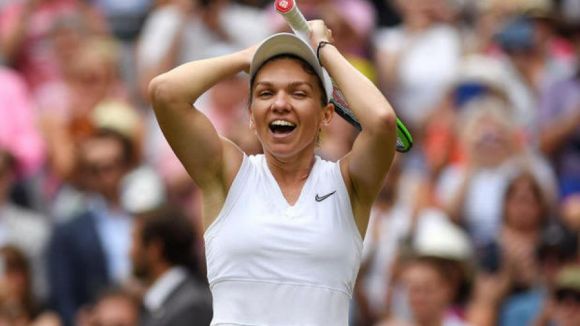 When viewed in the harsh light of cold reality, this was a clinical carve-up.

27-year-old Simona Halep committed only three unforced errors and couldn't have place her shots any better if she set them down by hand.

The Romanian totally dissected 37-year-old Serena Williams' game -- 6-2,6-2 -- in a championship match that wasn't even that close.

Halep served notice early that she was in the zone. From the first game, dudette showed the lines were hers. It opened up the court for her, leaving Serena trying to defend too much space.

She was exceptional at keeping volleys in play, ultimately outlasting Serena's accuracy. This was a major factor in the 23-time Slam winner committing a whopping 26 unforced errors.

The match was history in less than an hour. Halep is now 2-9 against Serena, emphatically.

Williams admitted afterward that this was just one of those matches where all you could do was tip your visor to a superior performance.

Her latest attempt at matching Martina Navritolova's record for Slams -- and at gaining on the Czech-American's Wimbledon championships; currently 9 to 7 -- had vaporized.

Halep, meanwhile, has continually improved her standing in Slam finals:

Her run in the 2018 Australian Open was borderline incredible. She lost the match, but in a fortnight of searing heat, Halep showed the single-mindedness that culminated in her subsequent French Open title.

Maybe the focused intensity is what she'd been missing. She'd been working with a sports psychologist, who seems to have converted her emotions into Scandinavian-sorta reserve.

In this match, it was Serena who felt the need to psyche herself up. Halep just moved on to the next point.

Not just on the court as a legitimate favorite in Slam events, either.

Halep's childhood dream was to become a member of the All England Lawn Tennis & Croquet Club. No princes have popped up to marry, so her only way to do so was win Wimbledon.

The newest member of The All England Club 😁#Wimbledon | @Simona_Halep pic.twitter.com/HoqVUb7BHa

It's good to be the master of your own fate.

It's evern better to know you richly deserve it.