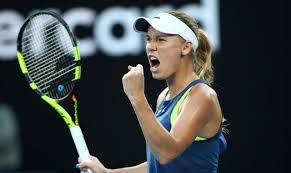 To be sure, give full marks to anyone who makes it to a world-class championship tournament final.

Caroline Wozniacki has finally been rewarded for a career's worth of effort to claim her first Grand Slam title after 43 shots at it.

Simona Halep must wait another day, but for her, just getting to the final match was as much a gauntlet-like ordeal as a fortnight of tennis.

No one really cruises through two weeks of a single-elimination bracket.

By the time yet another epic third set appeared, it was clear the toll was finally being taken:

Both players are baseliners, as most are these days, and there were around 100 points that needed five or more volleys to be earned. Wozniacki won 27 of those that went nine or more.

As if Halep hadn't seen enough of these already:

Extended exchanges were the last things Halep needed after the two marathons she endured to make it this far.

Incidentally, if the occasion ever presents itself where you'd wanna be suave and debonair when the topic turns to tennis at your club, here's a tip:

It's a Slavic thing, which is why ‎Yuri Sharapov's daughter's name is Maria Sharapova, which English speakers mispronounce, too.

If you've caught Wozniacki's home page, you'll see she's got a lot more in common with Sharapova than tennis.

And why not? Use it while you've got it. It's the way of the world.

Headlines about prize money were made before the Australian Open started, and the women's end of the deal was reflected in the tournament. Far and away, their bracket provided the majority of its highlights.