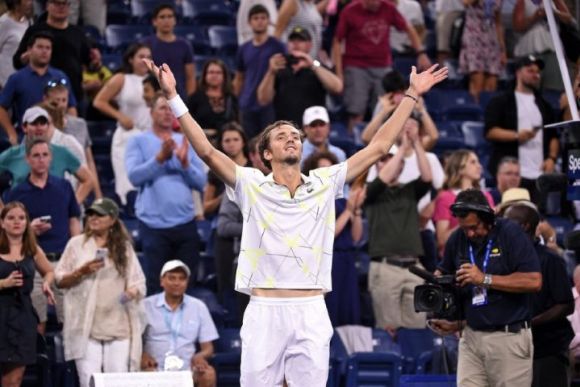 It may just be us, but men's tennis suddenly feels really compelling.

Obviously, there are the relentless antics of Nick Kyrgios, whose commitment to mayhem is unparalleled.

However, we may have a new contender to the throne.

However, he also appears to be some sort of cartoon villain.

Check out this fun footage from his third-round match:

Medvedev is in a foul mood, throws a tantrum at the towel guy then throws his racket when the code violation is announced #USOpen pic.twitter.com/YyNtfbR0ry

The New York crowd quickly voiced their displeasure with Medvedev after that display of fellowship, so the grumpy Russian gave them a vulgar finale:

He most certainly did.

This was no mere blip on the radar, though, as Medvedev continued the assault on both his opponent and the increasingly hostile crowd in the next round.

After advancing at the US Open, Medvedev openly basked in boos from the New York crowd. pic.twitter.com/hGBKfSXdlW

He then continued this revolutionary troll work in the post-match interview.

Daniil Medvedev doesn't mind the booing in New York. He feeds off of it. 😂 😡

Holy shit, he may as well have been twisting his mustache while adjusting a monocle.

Or snorting a mountain of cocaine.

Predictably, the aforementioned Kyrgios is a big fan:

Hahaha I rateeeee what medvedev said to the crowd last night 🙊

Perhaps these two cut-ups can pool their resources to pay down the debt from their Open fines.