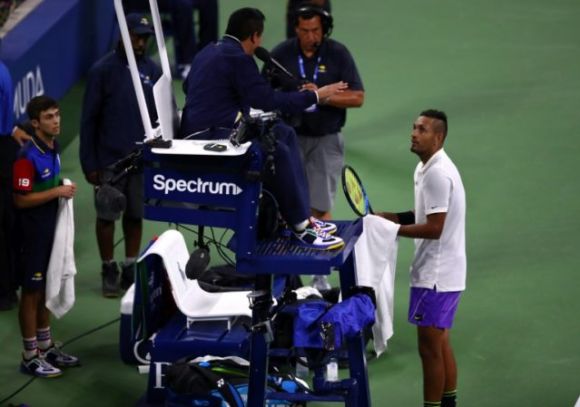 The legend of Nick Kyrgios grows with each passing tournament.

With the 2019 US Open underway in New York, our favorite malcontent is really turning on the charm, continuing his relentless assault on chair umpires.

Nicky is somehow able to find the most trivial shit to complain about, whether it's a water bottle or a white towel.

Dude's wasted little time this week, having already found creative new ways to irritate both tournament officials and his opponent in his very first match.

The 24-year-old Aussie dispatched someone named Steve Johnson in straight sets in the opening round, but still managed to piss off pretty much everyone in the process.

Here's a fun exchange between Kyrgios and the chair umpire, with Johnson getting involved, as well:

Apparently, people should be confined to their seats while Nick is serving.

Johnson was clearly getting annoyed with the schtick, even asking if Kyrgios would rather host a show than play tennis.

It seems pretty obvious that he wishes to do both simultaneously.

But there's so much more.

After the match, Nick decided to interact with some of his devoted followers, even offering up a souvenir:

Always classy Nick Kyrgios. Wipes his sweat, crotch, armpits, then spits in a towel, right before throwing it to some fans. Real cool @NickKyrgios 👍 pic.twitter.com/BHqovyncEn

Kyrgios even conducted a public therapy session with himself during the match.

He makes a valid point there.

But dude saved his best and most self-destructive for after the match, describing the ATP as corrupt when asked about being fined.

Nick Kyrgios on whether the $113k fine affected him mentally coming to NY:

"Not at all. ATP is pretty corrupt anyway. I’m not fussed about it at all."

However, he quickly realized he could be suspended for such talk, and backpedaled furiously:

I want to clarify a couple of things.... pic.twitter.com/wRCWcj3tJc