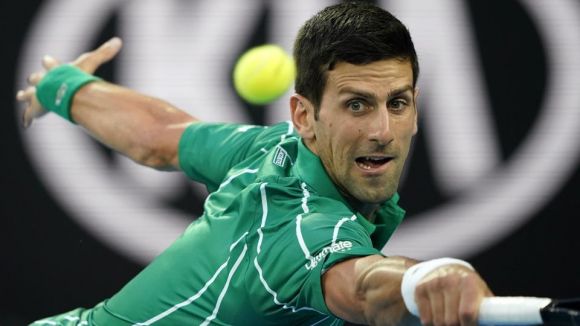 It's highly likely that the day's play has produced a pair of favorites to win the Australian Open singles titles.

To say both are firing on all cylinders right now is an understatement.

The DjokoCop being in peak form for a Slam is no surprise. Kenin emerging from the shadows of other is.

3-seed Federer picked the wrong day to show the strains of his two Houdini acts earlier in the tourney. Those battles took their toll on his 38-year-old bod. Specifically, dude had a groin muscle angry at him.

Djokovic noticed. The famous Swiss burst wasn't totally there, and neither was Federer's full extension.

The thing is, dude was paying more attention to his opponent's game than he was to his and damn near paid for it before righting the 2-seed ship:

The Serb's thus punched what will be his eighth ticket to an Aussie singles final.

At this moment, he's gotta be odds-on to claim a 17th title in Melbourne.

Kenin might wanna check out a pair of shades, too.

She disappointed a legion of locals by eliminating Barty, the top seed and one of Oz's own.

What's striking about her game is just that: her striking. She doesn't possess a cannon for a serve, but she keeps volleys going, going and going, getting the payoff more often than not.

Stretching out points is one thing, but dudette looks so intensely focused when she's doing it.

She simply outlasted Barty to edge her off the court and outta the bracket.

The 14th-seeded Russian-American will play for her first Slam title against unseeded but dangerous Garbiñe Muguruza, who proved just that by upending 4-seed Simona Halep -- 7-6 (10), 7-5 -- in another point-scrapping clash.

The Romanian was totally exhausted by Melbourne's 40ºC heat in last year's Open, and the well ultimately ran dry against a Spaniard who's definitely re-discovered her game:

So much for the expected Halep vs Barty title tilt.

If what's now the shock women's final turns out to be a grinder, Muguruza may match Kenin in relentless tenacity, but Kenin's laser-targeted accuracy has been the difference in dropping the likes of Coco Gauff and Barty.

It probably will again.