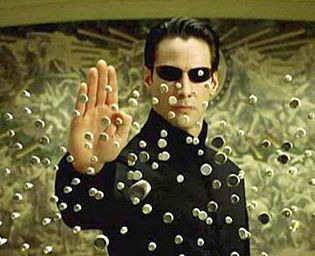 Sometimes, it helps to be both lucky and good.

Case in point: Roger Federer at this year's Aussie Open.

The Swiss master spent much of his third-round match against unseeded homeboy John Millman figuring out what he was still doing on the court.

Somehow, dude perservered to cap a five-set comeback that required the super-tiebreaker to decide it.

Millman had surprised Federer in 2018's US Open and was thisclose to doing again.

Yes, dogged determination was among the major factors this time, too, but so was utilizing every edge he could muster.

That's verboten under USTA rules, but the ITF regulations don't even consider it, so score one for the dark arts.

Bottom line, though, it didn't work, as opposed to Federer, who had to pull a metaphoric rabbit outta his own hat. Even he's not sure how he did it:

As if that wasn't enough of a scare for one tournament, the 3rd-seeded Federer had to become even more strong-willed in his quarter-final clash with the aptly named Tennys Sandgren.

He surpassed Millman by a mile in the Dennis Green 2.0 category as it pertained to defeating Federer. As in the tennis version of ...

How in the name of Rod Laver does one blow seven match points?

Federer's not exactly performing to his customary Swiss-timing precision, but dude certainly has a knack for rising to the occasion.

He'd be well advised to re-discover that accuracy in a hurry. Novak Djokovic is next on his schedule.

The 2nd-seeded Serb swept No 32 Milos Raonic in a relatively spirited match until the Canadian's devastating serve was totally negated, 6-4 6-3 7-6 (1):

And so it was that Sandgren is left to wonder what coulda been as he joins the rest of us in watching a clash of titans that we've all seen many times before.

But it never gets old.