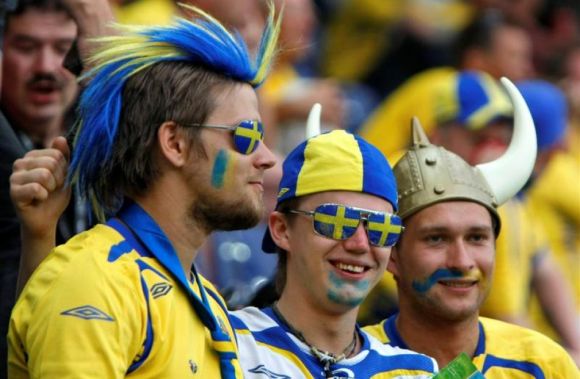 Anyone who's ever wound up killing time for whatever reason in a Scandinavian-themed gift shop has surely seen mugs, shirts, and magnets that say:

You can tell a Swede, but you can't tell him much.

Their neighboring Norwegians, Danes, and Finns may knowingly smirk about that old joke, but right now, the rest of the European football world is raising its eyebrows instead.

The top two Swedish leagues -- Allsvenskan and Superettan -- have announced that -- despite the pandemic -- they're starting their seasons on Sun 14 Jun.

And they're hoping fans will be filling the stands.

If there's a polar opposite to how things are done in Belarus -- where football's in progress and they're fighting Covid-19 with tractors and alcohol -- one would've expected it to be in Sweden.

A capitalistic liberal democracy where public services -- such as its world-class healthcare -- are free and taxes have decreased to reasonable levels in recent times, Sweden's societal characteristics are markedly different from non-Nordic countries such as the USA and United Kingdom.

Historian Lars Trägårdh -- a Swede who resides in the USA -- notes the contrast this way:

As a result, the government issued an advisory instead of a lockdown when the extent of the Covid-19 pandemic became known.

The Swedish medical community, though, has been harshly critical of this approach. They point to the cold, hard fact that their country has suffered more Covid-19 deaths than those of all their neighboring nations combined.

Sweden views itself as a model society that's always 'way up there -- higher than the USA and UK -- in damn near every quality of life survey in existence.

Nations don't acquire that status by being stupid. Where are they going with this, and why do they think they'll be able to open their football season in mid-June when the rest of the world's not sure about opening anything?

Can Sweden give the global sporting scene reason to believe they can return soon, too?

Medical experts from numerous countries are warning that -- like the Spanish flu of 1918 that came on in three waves over the course of three years -- a second bout of Covid-19 is virtually certain to reappear this autumn.

Unless science bestows a miracle upon us by finding a proven effective vaccine and then pharma figures out how to mass produce it in a timely manner, it's becoming evident that the only way sports and just about everything else is gonna reset anytime soon is to focus on treatment and mitigation.

Progress is happening for treatment. Responsible social action will need to cover mitigation, and that's why the Swedish approach is of keen interest.

Whether it ultimately proves to be accurate is yet to be determined, but here's their Public Health Agency's premise:

A sorta faux herd immunity, with the country easing into it.

Their data says the demographic trouble spots are where most of the mortality is happening:

The Public Health Agency thus plans to double down on protecting these groups and trust the balance of their citizenry to be socially responsible.

For herd immunity to be effective, 60% of the populace must be deemed immune. This number was clearly not reached in the UK, and the results were disastrous. The British are now locked down even tighter than the Americans.

Sweden's taking a long view, anticipating when all is said and done, their human damage will be in line with those who took stricter measures. One reason for this is they believe their social easing has already allowed Covid-19 to permeate more of their population than has been measured.

They're thinking they're succeeding at herd immunity because of the subtle distinction between British reserve and Swedish restraint.

Data is emerging from the USA that the Swedish approach could be right.

A Stanford research project -- and a related study out of USC -- has yet to be peer-reviewed, but it's indicating that Covid-19 infection in parts of California is more widespread than previously believed. If so, it's logical to assume that fewer people are dying from it by a factor of 50x-85x.

It's a small sample size and data-gathering methods need to be evaluated, but this could mean that antibodies are being developed within the populace. If Sweden's isolation of Covid-19 hotspots and social easing everywhere else is the reason for the plateau in outbreaks the Public Health Agency is announcing, they may have cracked the code for herd immunity via mitigation.

Clearly, much more study is needed and reams more data are required, but the glimmer of possibility exists that, pandemic or no, there is hope that sports could safely return without Covid-19 being eradicated by vaccine.

This approach, though, definitely won't be as fun as what the governor of Nairobi is suggesting:

Note: WHO warns that drinking alcohol does not protect you against COVID-19 and can be dangerous pic.twitter.com/vuSuVAb8dy

In the meantime, come mid-June, the football world's gonna have eyes on Sweden with fingers crossed. The rest of the globe might be interested, too.