Bundesliga's Good to Go, and the World Will Be Watching 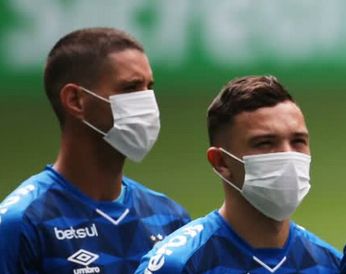 The matches, that is. Not the surgical masks.

German Chancellor Angela Merkel, after completing a video conference with the country's 16 state leaders, announced that the nation's top two football tiers are cleared to resume their schedules on Fri 15 May.

Both the 1. Bundesliga and 2. Bundesliga are intent on completing the current season by Tue 30 Jun to satisfy their broadcast and contractual agreements that -- let's be real, here -- is the primary reason teams will be back in action.

First up will be the Revierderby between Borussia Dortmund and Schalke 04, which will also be the first challenge for crowd control.

Although the matches will be played in empty stadiums, with only 30km separating their cities and rabid fan bases, the police will have their work cut out for them by keeping the areas around Signal Iduna Park clear of large gatherings.

Chancellor Merkel -- a scientist prior to her political career -- is taking the same calculated risk other nations are by loosening the lockdown conditions amidst the Covid-19 pandemic.

A few Bundesliga players aren't helping the cause:

Salomon Kalou has been suspended by his club Hertha Berlin after filming himself flouting social distancing rules on his return to training.

Appeared to make light of #COVID19 live on social media as the Bundesliga attempts to return to action this month. pic.twitter.com/d2Ch7ox9xQ

It's not just the regular season that needs to be squeezed into the window the DFL sees closing at the end of June.

It doesn't help, either, that Werder Bremen is having issues with the local government about reopening their facilities.

Clearly, the Bundesliga's green light is a more significant development than, say, Sweden going full-on return or Belarus defying reality. It'll be who the Premiership, La Liga, and Serie A are scrutinizing.

Among other measures, they'll take note of how FIFA's temporary guidelines affect strategy:

What's more, the league has opted to keep matches in their originally scheduled venues, unlike the Premiership's plan to use neutral hub sites.

Even more critical, what happens to the restart if Germany's positive-testing rate rises again?

Nothing yet. That's the great unknown.

The Bundesliga has all the protocols in place -- multiple tests, 14-day quarantines for infected players, et al -- but until everything is put into practice, this resumption of play is gonna be anybody's guess.

That's supposed to be the fun of sport. This time, though, it's a bit more serious.