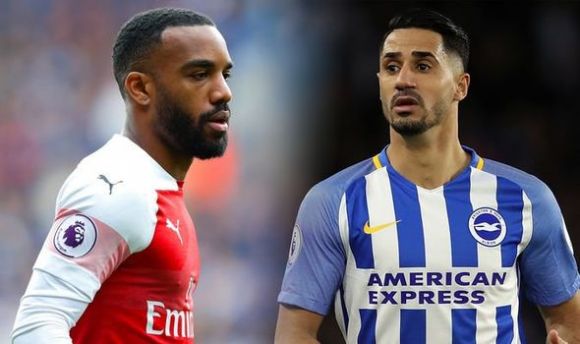 After this sorta day, the only thing left for Gunners fans to do is wonder what the hell albion means.

And wonder how their big-brand Arsenal side could be humbled at home by a buncha Seagulls.

Can't blame it on Arsène Wenger anymore, either.

Having the privilege of playing later than both Manchester United and Chelsea, the Gunners went to the pitch aware that there couldn't be any other result than a win.

Oh yes there was.

Resilient Brighton equalized from the penalty spot in the second half, and the 1-1 draw left Arsenal's drive to a Champions League spot in tatters.

It definitely didn't look that way at the beginning.

Arsenal's early dominance was converted into a penalty when Alireza Jahanbakhsh brought Nacho Monreal down in the box. Pierre-Emerick Aubameyang stepped up and sent goalkeeper Matt Ryan to the wrong side:

The Gunners threw anything they could at Brighton in the rest of the half and should've scored on couple of good chances.

However, the scoreline remained unchanged at halftime.

The old adage about letting underdogs hang around until they start believing they belong in a game was proven correct once again.

Brighton grew into this one and, in the 61st minute, earned a penalty themselves. Granit Xhaka fouled Solly March where such things shouldn't occur, and Glenn Murray did the honors:

Dudes turned into Pop Gunners when the chips were down. There's always the Europa, especially if Manchester United keeps wetting the bed, too.

And albion is the oldest known term for Great Britain that was often loosely translated as united. Which is now more than the Gunners and their dreams can say.