Published on 1-Feb-2020 by Alan Adamsson 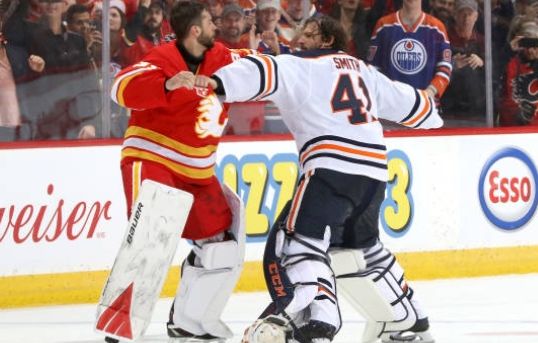 Now we know what they did for an encore.

Even with the Zack Kassian-Matthew Tkachuk bouts becoming the NHL's version of Ali vs Frazier, the Battle of Alberta actually took the ferocity stakes a couple of degrees higher by confirming that hockey, above all, is  the teamiest of team games.

Edmonton and Calgary took yet another break from the Pacific Division race to stage a line brawl, and so everyone could get involved, a goalie fight:

The Flames' Cam Talbot has been around long enough to know that he was on a kamikaze mission to throw with Mike Smith.

The Oil's goalie can go from zero to deranged at warp speed. Daniel Craig in James Bond steely-stare mode has nothing on him, as evidenced by Talbot's reluctant glide to center ice where he knew he was about to take one for the team.

On the bright side, after both goalies were ejected, at least Talbot wouldn't have to face any more Connor McDavid and Leon Draisaitl shots for the rest of the night.

In the larger scheme of things, not even Smith can carry Ron Hextall's jock in the realm of PIMs.

The former Flyer complemented his Conn Smythe and Vezina with the NHL's single season record for goalies with 113 minutes' worth.

Talbot had come into the game because starter David Rittich was chased early in the Oil's ultimate 8-3 blowout that vaulted them up to second place in the Pacific.

Ironically, it was his José Bautista-style stick flip in the teams' previous meeting that fueled tensions in this one.

Carryover memories of the flammable tinder kind are real phenomena.

Anyway, dude had to suffer the indignity of returning to the game after Talbot's game misconduct. Worse, dude surrendered two more.

Rumor has it that goals do figure prominently in these affairs, so here's a whole buncha them:

With the three fights in this game, the Oil has now totalled 260 fights in their history against the Flames. That's 80 more than their second most bitter rival, the Kings: 180.

If they add to it in their last regular-season meeting, it'll be because that game's a blowout, too. It's on Sat 4 Apr. The playoffs might really mean something to both teams by then, and odds they'll have other things on their mind.

Then again, this is the Battle of Alberta.