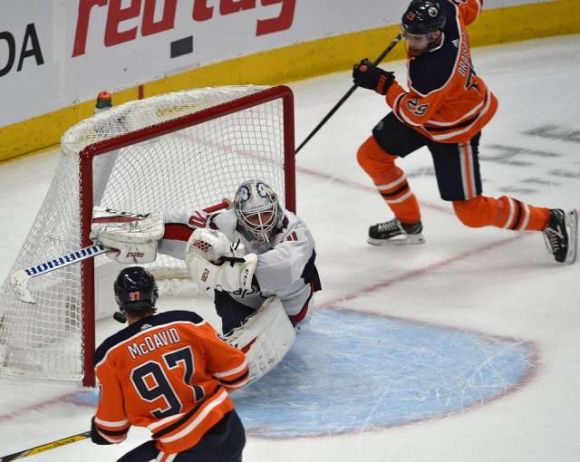 According to the NHLPA, the league's second-best sheet of ice is in Edmonton's Rogers Place.

And what could well be the NHL's best sniping combo is taking full advantage of it.

Not only because they're Flash-fast out there, either.

Connor McDavid and Leon Draisaitl have a chemistry that makes every shift they take a must-see occasion.

Because they're so ensconced in the outer reaches of the Great White North with a club that didn't contend last season, dudes are often forgotten by the sporting public at large.

That's changed this time around, at least so far, and the Edmonton Oilers are off to an 8-2-1 start and leading a Pacific Division that looks to be up for grabs. McDavid's now acclaimed by most to be the NHL's best of the best, and all it takes is a few highlight videos to understand why.

The Oil matched up with Alexander Ovechkin, Nicklas Bäckström, and the Washington Capitals last night, where McDavid and his faithful sidekick Draisaitl saved their best for last:

That goal completed the Oil's comeback from a 3-1 third period deficit that happened because Ovie popped a pair of second-period markers on his way to becoming only the eighth player in history to notch 700 goals.

All he needs is 33 more and, barring injury, his career record shows this to be a realistic scenario this season.

McDavid gave them the sorta hometown discount that players who realize how far a cool million actually goes in everyday life and who aspire to greatness by getting their names etched on the only Cup that really matters.

The Oil's locking up Draisaitl was a good start, and their hiring of Ken Holland to do for them what he did for the Red Wings is huge.

So far, so good, anyway.

Recruiting James Neal to the cause was a key get. Dude gives added punch to Edmonton's second line, which obviously takes some of the onus off McDavid and Draisaitl.

He made his presence felt again in the Capitals game, adding an assist on McDavid's goal that sent the proceedings into overtime, where Draisaitl's score sealed the 4-3 victory:

Whether the Oil's got depth enough to keep their hot start going in questionable.

Holland's gonna be under pressure to make his own changes on the fly this season, and how he fares will go a long way towards Edmonton showcasing their main dude come springtime.

Since the NHL wants their stars to gain a higher overall visibility, dude's got more than the Oil watching closely.