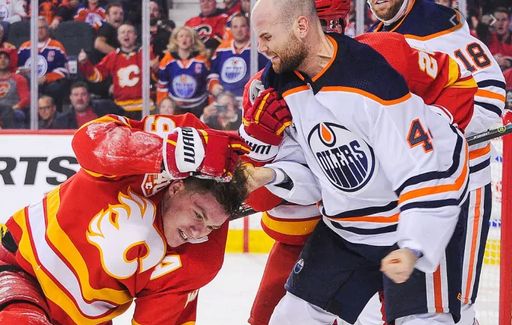 Sports reporting commonly refers to games in warlike terms because, well, it's the best way to use warlike terms.

War itself happens to suck.

Someone just needs to tell that to Zack Kassian and Matthew Tkachuk. Those dudes mean it when it's time to throw. Take their first bout, on 17 Nov 2018:

Tkachuk and Oiler All-Stars did honor a truce in St Louis last weekend, but it clearly wasn't like the one that put the Korean War on hold. The Battle of Alberta has no DMZ.

That's why the 11 Jan 20 installment of the rivalry featured more fisticuffs. Memories can be long.

Tkachuk went sorta fine-line legal with a few checks on Kassian, who basically decided -- as hockey players are wont to do -- that if the refs would see things his way, he'd deal with matters himself:

These crews are starting to make Flyers-Penguins look like they're playing tag.

The hell of it is, both the Flames and Oil are in the thick of a wide-open Pacific Division race. The first clue it's up for grabs is the Vancouver Canucks are currently leading it, but that's another amazement for another day.

At some point, these sparring partners have gotta be more concerned with the scoreboard than settling scores, because it doesn't seem like that's gonna happen anytime soon.

With all this in mind, the NHL brass decided to load up a top officiating crew as well as a few of their own for the Wed 29 Jan renewal of hostilities.

Chris Lee and Kyle Rehman are the referees for tonight’s CGY-EDM/Tkachuk-Kassian game. Bevan Mills and Greg Devorski on the lines. Veteran crew getting the call for this one. Head of @NHLPlayerSafety George Parros and NHL director of officiating Stephen Walkom will also attend.

And with that, game on:

Damn. A quickie. Of sorts.

As a matter of interest, the Flames got the extra point in a shootout with Sean Monahan sniping the winner for a 4-3 verdict.

They'll meet again this coming weekend. The way this situation is shaping up, if that's a close game, too, expect Kassian and Tkuchuk to provide another sideshow. If it's a wipeout one way or the other, expect an escalation.

Because Battle of Alberta.