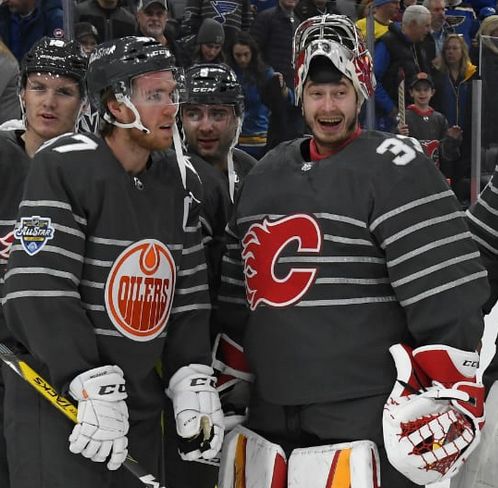 All-Star games are the last place anyone would think a hockey fight would break out, and to everyone's relief, it didn't happen in St Louis tonight.

Not between the divisional opponents, but between Pacific Division teammates.

In hockey, there are traditional rivalries and then there are blood feuds, kinda like Red Wings-Avalanche back in the day and Flyers-Penguins every day.

The bad blood that's brewing out West, though, is currently in a perpetual boiling point.

That'd be the Battle of Alberta, when the Edmonton Oilers and Calgary Flames do more than throw out all the records. They just flat-ass throw down.

This goes back a couple of seasons, to 17 Nov 28, when Tkachuk lit up Oil scoring mainstay Leon Draisaitl.

The German's too valuable to risk injury and minutes off the ice for fighting, so Kassian stepped up and it was on:

Yes, they're serious. They really mean it. Every chance they get.

So there actually was a sliver of reason for concern that something might pop up to mar the All-Star festivities. Fortunately, though, diplomatic restraint prevailed.

Kassian wasn't in St Louis, of course, but Draisaitl and Tkachuk were. Both responded to interviews that this was a time for truce, and they wound up honoring it, albeit in a subtly chilly fashion:

All this contained more drama than the games themselve, of course, but they sorta tightened up as that $1million winner-take-all reward started looming.

The pre-game was warm and fuzzy, though. It was a cool move for the host Blues to have superfan -- and inspiration to us all -- Laila Anderson introduce the homies:

As if anyone's counting, that's the Pacific's third All-Star 3-on-3 title in the five years the NHL's gone to this format.

They may retire as the all-time champions, too. It's looking like the All-Star game's gonna be tweaked even more. After all, who except for geography geeks cheers for divisional teams?

Ask the Flames and Oilers faithful, not to mention anyone else.

The hints are the NHL will switch to some sorta nationality thing, eg- Canada vs USA, Sweden vs Finland, Russia vs Czechs, or some sorta combination thereof.

The players are all for keeping the 3-on-3 format, and the fans like it better than the 5-on-5 shinny that preceded it. With teams developing varied strategies to regular-season 3-on-3s, this could also add a dash of intrigue, too.

But not as much as the resumption of Kassian vs Tkachuk. That's about to resume.