Florida Panthers Sign Their QB, as in an Actual QB

Published on 9-Aug-2021 by Alan Adamsson 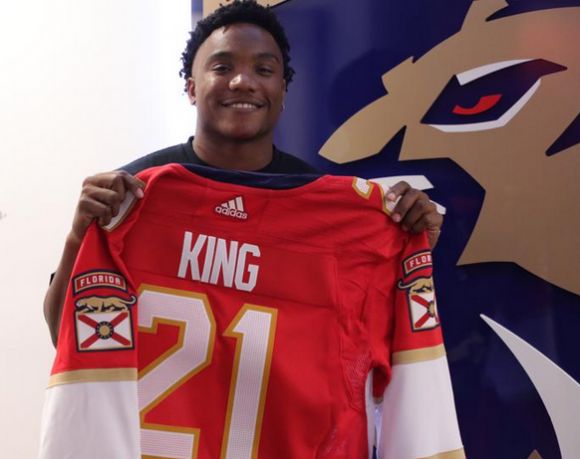 The brave new world that former UCLA star Ed O'Bannon fought so hard for and ultimately won has finally spawned a revenue frenzy among college jocks that even he could hardly have imagined.

Notably, it paved the way for powerful sports attorney Jeffrey Kessler to file what's become known as the Name, Image, and Likeness --- aka NIL -- suit, Alston vs NCAA, that prevailed at the Supreme Court in a 9-0 rout.

This has been in the works for seven years, and it's not taken long to have an effect:

It didn't take long for the schools themselves to cater to the new rules, creating media and influencer curriculums to help attract athletes to their programs.

As to some of the athletes, it's safe to say that a good number of them are adapting at warp speed.

Take high school slinger Quinn Ewers, for example. Dude's skipping his senior year and starting his Ohio State career early so he can cash in on NIL offers he's already given. The kid could be $1m to the good before he even steps on a college field.

I may be leaving Texas soon to take it to the next level but I made sure to take the best Texas drink company with me. I am pumped to be representing Holy Beverages @holykombucha for many years ahead so that they will always make sure my fridge is loaded with Holy Tepache pic.twitter.com/ZWmDoZlz6h

This has got Buckeye coach Ryan Day asking questions about equitable income opportunity considerations, but really, NIL will allow more than football and basketball glory boys to cash in.

For example, there are 77% more female social media influencers than male, and they actually earn more than the boys.

From the way NIL is opening doors to student jocks and jockettes, this is the way institutions of higher learning are supposed to work in the 21st century!

So it is that full marks must be given to Miami Hurricanes QB D'Eriq King for his creativity in expanding the possibilities of NIL in an entirely new direction.

Dude's inked a deal with the Florida Panthers.

Somewhere on this earth, Jeremy Bloom is feeling vindicated.

Dude was both a kicker for the Colorado Buffaloes and a professional skiier. However, before the O'Bannon case, college jocks were prohibited from receiving endorsements of any kind. He sued the NCAA but lost.

He's kinda like the Curt Flood of the NIL movement. Flood was an elite center fielder for the St Louis Cardinals back in the late 1960s and, after refusing a trade to the Washington Senators, sued MLB over the reserve clause. He lost but paved the way for the landmark Messersmith-McNally decision that ushered in baseball's free agency era.

King's deal is more of a symbiosis than an endorsement:

D'Eriq King (@DeriqKing_) has signed as our first-ever FLA Athlete, becoming the first collegiate athlete to sign an NIL agreement with a pro sports team!

The Panthers are doing what many colleges have undertaken. Their FLA Athlete program is designed to provide marketing and promotion opportunities to accompany their own social media campaigns that will also serve to raise their visibility as active members of the community.

To them, King was a perfect fit as their first signing.

Dude's into fashion, and he'll be designing Panthers merch that the younger demographics would find desirable. He'll also work with the Panthers' own digital and social media teams to provide content targeted at the Zoomers the club would love to attract.

It's not taken long for this deal to sink in and generate rave reviews from all sides.

Expect other pro clubs to follow suit. In a hurry.

The NCAA's been pushing for years -- hypocritically, in the opinion of some -- that most college athletes go pro in something other than sports. They've been dragged, kicking and scratching, into the NIL era, which ironically is making that slogan ring a little more true.

It's about damn time.