Cornhuskers to Get 'Ready Now' for NIL Branding Income

Published on 9-Jun-2020 by Alan Adamsson 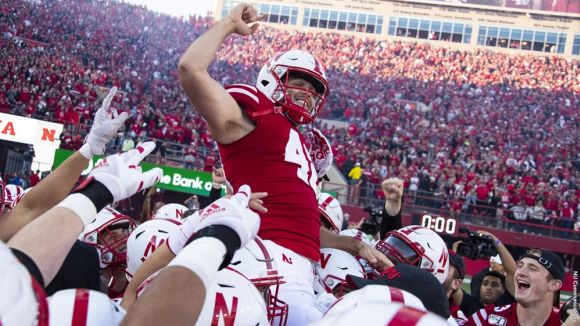 That ol' feelgood bromide the NCAA rolls out from time to time goes something like this:

There's a shit-ton of student-athletes out there who are going to go pro in something other than sports.

Until then, of course, those jocks and jockettes are gonna make the organization and its members a few kajillion dollars along the way.

So it's about damn time someone found them a way to cash in a few bob while they're doing it.

The NCAA's Name-Image-Likeness policy had been gathering cobwebs for too long.

As the proposed update currently stands, the Knight Commission is recommending that student-athletes can do what every other student has a right to do while going to school, ie- earn money:

The upgrades, assuming they're approved, aren't set to kick in before the 2020-2021 academic year.

It's good to know that at least one institution of higher learning is taking the initiative and doing what schools are supposed to do, aside from enlightenment ...

So, full marks to the University of Nebraska for putting together the Ready Now program that'll collaborate with Opendorse to educate students on building their own brands.

Every Husker jock and jockette will be provided with:

They'll be given content calendars, performance benchmarks, and various strategies to prepare them to get out into cyberspace and do a bitta 21st Century earning by having a clue.

Clearly, some sports will offer a stronger springboard than others for launching these sortsa careers.

But hell, anything's better than nothing.

Like any enterprise, there's stuff to learn in order to stay on the straight and narrow.

The Huskers will also give a boost to each player by putting their handle and links on bio pages at their website.

More schools will no doubt jump on board with similar programs,as well they should. Georgia Tech's already figured this out, and recruits will surely be putting their availability on their priority lists sooner rather than later.