The Rock Says Get Ready for XFL 3.0 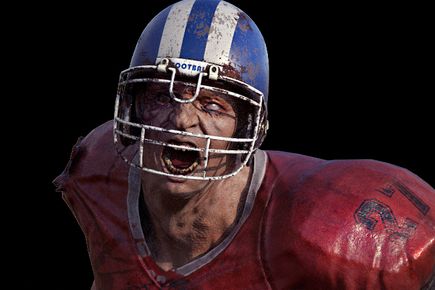 Maybe sometime in the 22nd Century, there'll be discussions during happy hour as to just how springtime pro football became the Holy Grail of North American sports.

Of course, that'll be when somebody's great-grandson today makes a bid to buy the defunct XFL and launch Season 26.0.

It's getting to the point where that league's even giving zombies a run for their money.

This time around, Hollywood's reigning highest-earning actor -- Mr Rock hizzownself -- has decided $15million is just too good a deal to pass up.

The bankruptcy judge's gavel has thus come down on that agreed price, and the man formerly and now currently known as Dwayne Johnson and his band of merry partners -- damn near literally -- own another pro sports business.

The XFL has yet to prove it's anything more than a money pit, but it's a great metaphor for why Venus flytraps thrive.

Digging into the details, though, the new owners have hedged their bets, which isn't really all that hard to do with the XFL.

If they do go forward, it's essential that they dilute a bitta bad blood and bring back Oliver Luck as their operations overlord. Dude's rules innovations were enough to make the games worth watching for that reason alone.

Some of the more dynamic were their solution to almost totally eliminating high-speed collisions on kickoffs and the resultant injuries, not to mention the boredom of touchbacks:

Apparently, if Rock & Co can land that major media deal, there's a shot at playing in 2021. It'd be a quick turnaround that'd challenge logistics to the max, but the thinking goes that Covid-19 might still be raging to the point that other sports will still be limited.

In other words, dudes -- and dudette -- are thinking bubble.

They've seen the one-venue success -- to date -- of the NHL East and West and the NBA, and they'll only have eight teams to protect. That should be at least as doable if the players can be just as disciplined.

If all goes according to plan, it could be.

The issue with the XFL, though, is it's never gone according to plan, which has been a function of not having deep enough pockets. Vince McMahon tried twice with his own wealth, with the result being he doesn't have as much of his own wealth anymore.

The new ownership bought a controlling interest in the French Ligue 1 soccer team Toulouse a couple of weeks ago and already has a piece of the Yes Network. Seems like they've got Wall Street figured out more than McMahon ever did, so perhaps this time, if the XFL does a TU 3.0, it won't be due to seed capital.

Basically, then, the odds of a third life for the XFL got a huge PR boost with this bid, but it's really only a $15m option for Mr Rock and his crew to take a hard look at turning it into a fixture on the sporting calendar.

Gotta say, though, if ever there was a shot at the third time being a charm, this'll be it.