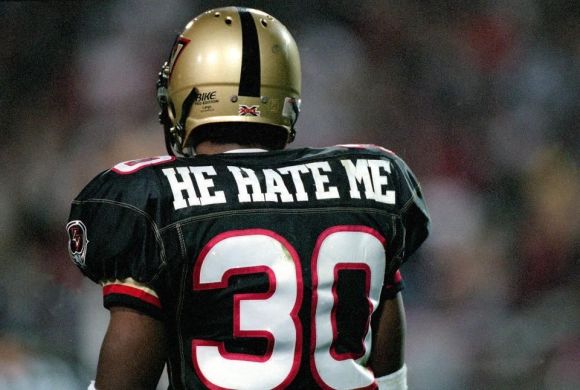 With rumors already swirling that an XFL 3.0 is trying to rise from the latest Spring league ashes, there are still matters to attend in this year's version.

It could get ugly, kinda like how the league folded this time.

Actually, it's because the XFL folded this time.

Seems like well-liked, highly-educated, football-savvy ex-Commish Oliver Luck wasn't too thrilled with the way Vince McMahon sent him to the metaphorical showers.

Besides being not very nice, this is just no way to treat the dude who brought a lotta cred to the XFL's reincarnation.

Not to mention the creator of new rules, a few of which may soon be the future of football.

For example, thanks to Luck's brainstorming, the league's kickoffs were too cool:

The XFL also put more productivity potential in what's usually one of the most boring plays in all of sports, the PAT.

When the LA Wildcats lined up at the 10 for a three and then forced an offside, they wound up scoring a three-point PAT from the 5.

It was the first one ever converted:

Even more impressively, Luck introduced timing rules to speed up the game and bring the half's and the game's final two minutes back into the realm of how the game's played during the other 56 minutes.

What success the XFL had this time around was due to Luck's imprint.

Still, McMahon has never been the one to let something like that get in the way if he can save a dollar or two.

That's the portion of Luck's contract as XFL Commsh that was still on the table when McMahon fired him with cause, alleging ...

Pretty weak set of contentions for what amounts to a weasel-move wuss-out.

If the court hearing -- if it ever gets to that -- comes down to a matter of cred, bet on Luck.

First of all, this is Vince McMahon on the other side. As that fact may not be enough, consider that he promised to keep the XFL away from his WWE operations. However, when ownership details emerged in the XFL's bankruptcy filing ...

XFL has filed for Chapter 11 bankruptcy listing both assets and liabilities in the range of $10-50 million.

There is a breakdown of ownership with WWE listed in control of 23.5% of Class B shares with the rest held by Vince McMahon.

It's clear McMahon clogged up a court docket with this suit so he can find a way to negotiate a settlement for cents on the dollar.

Unless he tires of the hassle, Luck probably won't settle. For the amount he's owed and the paper-thin argument McMahon's attorneys filed, It won't be a surprise if McMahon sucks the entire tailpipe.

As to XFL 3.0, maybe it would work with someone other than McMahon at the helm. If anyone actually tries it, they might think of taking Luck back if he'd agree. They could use his influence, and they'd definitely know what they're getting into. It'll say so on the dotted line.