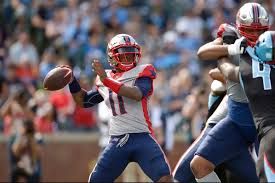 This isn't exactly what Texans mean when they say the top two sports in their state is football and spring football.

Maybe if the XFL manages to hang around, though, a natural rivalry between the Houston Roughnecks and Dallas Renegades might actually be included in the latter.

The sparks are there, but why wouldn't they be when fans from these two cities have a chance to twist the knife?

The Houston Roughnecks are in town, so naturally, the @XFLRenegades staff is beating on trash cans in honor of the Astros. #XFL #MLB pic.twitter.com/zOarAs7Acw

It really is shaping up to be a long season for the Astros.

The Roughnecks, of course, want a long season, just like the rest of their XFL brethren. It means the league's got a shot.

18,332 fans showed up in Arlington -- at the stadium where the Rangers used to call home -- which is on the high end of the range league brass was expecting for attendance this season. They witnessed the sorta game that Dallas QB Landry Jones hoped they wouldn't.

Ain't got no choice.

Dude had the day from hell:

That's one way to go 4-0 and remain as the XFL's only undefeated team.

In the league's other game, Tampa Bay finally got rid of that ugly zero in their win column by laying a goose egg on the suddenly hapless DC Defenders, 25-0.

Taylor Cornelius started the season as the Vipers' third-string slinger, but with Aaron Murray still hurt and Quinton Flowers leaving in a huff, dude got to flash a bitta Okie State Cowboy:

Not much of an afternoon for chuckers named Jones.

At least Cardale didn't have an injured knee when he was banished to the bench. Perhaps dude thought Tampa Bay would be another Wisconsin game. It obviously wasn't.

Two road blowouts in consecutive weeks does not bode well. Not the best of times to meet one of the XFL's best teams. At least they're getting the BattleHawks at home.