Guardians Find a QB Who Doesn't Rip Everyone; BattleHawks Grind Down Dragons 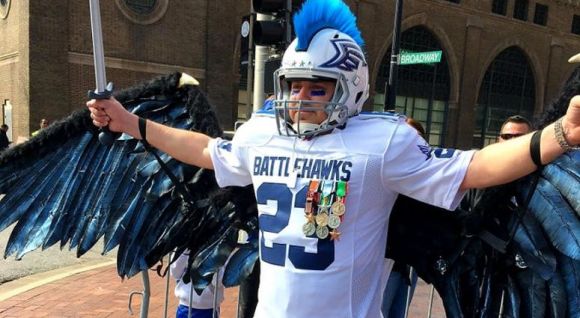 If Charles Dickens had been around to cover the XFL's games today, he probably woulda opened by writing, It was the best of cities, it was the worst of cities ...

This weekend Vince McMahon's version of the grand experiment will be halfway through the dubious standard of existence set by the late and unlamented Association of American Football, and both ends of their attendance spectrum were on display today.

Maybe the euphoria in St Louis is just an outpouring of pent-up emotion. Football fans there finally have a lightning rod there in BattleHawk form where they can collectively and overtly tell Stan Kroenke to stick it after moving the Rams back to Los Angeles.

If so, it's providing the BattleHawks a fertile opportunity to endear themselves to the city in a way that the MLB Cardinals and NHL Blues have.

If the XFL can keep it going long enough for a lofty goal like that to happen.

Former Ole Miss Rebel Jordan Ta'amu was the centerpiece again for St Louis as they edged the Seattle Dragons, 23-16. Dude successfully spread the ball around -- and tucking it away himself -- to counter the BattleHawks' sluggish ground game, their preferred mode of attack.

The Dragons don't feature their defense by choice. It's just that they don't have an offense. Their D did what they could, but Ta'amu West Coasted them all day, chopping clock, grinding down, and ultimately, winning:

Seattle can only hope the second half slinger switch to BJ Daniels will pick up their performance. Dude showed signs, but playing from behind leaves no margin for error.

And face it, most of these players are in the XFL because their pro careers have been marked by margins for error.

If any franchise knows this, it's the Guardians.

Having their franchise QB conducting a serious bitchfest isn't exactly a new league's PR dream, especially in the Big Apple, where people who care might not mind a bit of attitude.

Unfortunately for the club, not enough people are caring. Mix that in with poor play, and coach Kevin Gilbride slid a new starting slinger into the game plan.

What's it say that dude was a breakout star in the AAF?

No matter where Luis Perez racked up his stats, they looked pretty damn good for the anemic Guardians.

Dude did just enough to spur his new team to a 17-14 victory over the XFL team that traded him:

Not that the Wildcats were wrong to deal Perez. Even in this loss, Josh Johnson is putting up numbers; in this case, 2-40 for 330 yards, 2 TDs, and enduring 1 interception.

Maybe New York fans will take notice of that. After all, winning football is more of a novelty there than the XFL itself.