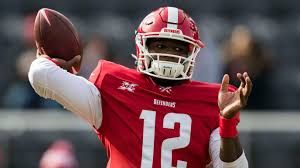 These must be giddy times for a start-up springtime football operation.

For another, answers to trivia questions are being created in droves. Stuff like first-ever TD, first-ever three-point PAT is still out there waiting to be claimed.

When the dust settled from the DC Defenders' 27-0 blowout of the New York Guardians, all sortsa records were set or broken.

Cardale Jones is chaos and it is beautiful

Matt McGloin at halftime to @diannaESPN: "We need to change the whole entire gameplan."

Head coach Kevin Gilbride: "I need to go talk to him & figure out what the problem is because he needs to play better."

Then McGloin threw a pick-six on their next drive. @xfl2020 pic.twitter.com/R2ssCwfzfx

Matt McGloin gets benched after completing 8-of-19 pass attempts with 2 INT, then proceeds to rip his team/coach while the 4th quarter is still being played.

This is peak XFL pic.twitter.com/JKVwShqTrQ

That's the old XFL we used to know and not love enough to keep it going.

Ahhhh, those were the days.

Here's how the blowout looked in highlight form:

So, what's the cure for damn near every XFL game to date being a beatdown?

The Seattle Dragons and Tampa Bay Vipers offered a clue. Simply match up the two clubs with the weakest offenses, and a 17-9 homie victory doesn't look all that outta whack:

A 10-game schedule goes by in the blink of an eye. Squads like these two have already played 20% of their season. They don't have much time to sort out what ails them.

Defense may win championships, but offense provides the spark for that to happen.

The Vipers sorely need Aaron Murray to return and look like what his Georgia Bulldog résumé projected he'd look like.

Maybe the Dragons should move former Navy phenom Keenan Reynolds to QB and find another dude to be their leading receiver. Not like that'd be tough; dude grabbed 3 for 87 yards, with that 68-yarder comprising most of them.

Until then, Seattle and Tampa Bay may be ripe for one of the stronger teams to challenge the Defenders' new record for largest margin of victory ... and the accompanying clicks of remotes changing channels before halftime.