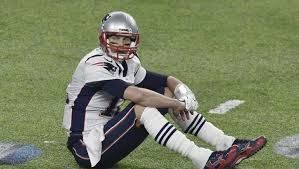 Both ends of the career spectrum were on display today.

As a result, Houston's celebrating a 22-19 overtime triumph that moves them along to a meeting with the Chiefs in Kansas City, and the Pats' 20-13 loss to Tennessee has them wondering what happens next.

For a good part of the Wild Card death match deep in the hearta, it looked like the young gun taking that proverbial next step in his development would be Buffalo's Josh Allen.

Dude made plays, but they came as part of a gonzo performance that really did put the wild in Wild Card. Mixed within it, though, was the coolness of a stat set that shouted Old School. Allen was the first slinger since the advent of color TV to:

WHAT A START FOR THE @BUFFALOBILLS.

John Brown throws to @JoshAllenQB for the TD! #GoBills

Still, the Bills kept being held to FGs, and it came back to bite them in the patootie.

By the time Houston got rolling, Watson was ready to atone for a skunked first half. Their charge from a 16-0 deficit began in third quarter, and the former Clemson Tiger had the Bills by their tail with heroics like these:

The city will be buzzing about those for at least a week, which is when their crew heads up to the stockyards, attempting to beat the Chiefs in Kansas City for the second time this season.

Meanwhile, a few hours later in a stadium far, far away from Houston's, Brady was completing a TD pass to former Patriots teammate Logan Ryan.

What a turn of events in New England pic.twitter.com/kVMmWKGSI0

The only way it helped New England was allowing them to get a head start on their vacation plans.

No one was thinking that at the season's midpoing, when the Patriot were 8-0 and cruising to another AFC East title. But then the Ravens game happened, a 37-20 loss that didn't look that close. That's when it dawned on some observers that a closer look at New England's first-half record revealed a relatively soft schedule.

Al Davis's Oakland Raiders used to bring in NFL outlaws all the time and succeed with them, something that Bill Belichick learned and duplicated. And it worked.

Their 4-4 second half happened because three playoff teams beat them: Ravens, Texans, and Chiefs. That'd be kinda understandable, but then Week 17 put a different light on the situation.

And that pretty much put paid to the Pats' aura of inevitable invincibility.

Until this Wild Card loss to the Titans, New England had gone 104 games between consecutive home losses.

Their defense may have held Ryan Tannehill to 8-15 for a measly 72 yards, but RB Derrick Henry and his trusty o-line gashed them for 182 yards on 34 carries.

Brady went for a mediocre 20-37 and 209, but even though dude wasn't getting much help from his receivers, something else seemed to be showing:

Dude wants to play until he's 45. With one qualified exception, that's about one year beyond precedent:

George Blanda played until he was 48, but the last five years were as the last of the straight-on kickers. His final meaningful snaps happened in the 1970 playoffs against Kansas City, and his final hurrah behind center occurred in 1972 at the age of 45.

Where Brady's different from the names on that list, of course, is he's still with the club that drafted him. This could change over the off-season, as he'll be an unrestricted free agent for the first time in his career.

One would think his return to the Pats is as close to a given as can be. Owner Robert Kraft will want him back, and he pays the bills.

Brady's hinted, though, that he's joined a long line of dudes who aren't into hometown discounts.

Moreover, it's on record that Brady and Belichick have disagreed more frequently than in the past.

Really, though, where would the former Wolverine go?

Offensive schemes are trending spread these days, college is producing QBs who make it effective, and few NFL teams with slinger issues wouldn't mind looking for a drop-back dude. In fact, only the Chargers and Colts come to mind.

Can't really see where a chucker going on 43 fits in.

If those teams were thisclose to being a playoff favorite, maybe. They're not.

Brady returning to the Pats, then, likely comes down to either understanding the market for 40-something QBs may be the same as a hometown discount or Belichick deciding Jarrett Stidham is ready to do things Brady can't do anymore.

Then again, maybe Brady will decide he'd like more time to terrorize his daughter on cliffs.

Dude and Gisele may be reducing their Massachusetts mansion's sale price, but it's difficult to believe they'll not have some sorta residence in the region. How much does Brady care that his last Pats pass was an INT? Would going somewhere else diminsh his legacy?

Sometimes, that means more than money. Then again, so does proving your legacy isn't down to just one team or coach. Sometimes, it's about you.

Brady's dropped enough hints to that effect. Odds are New England gets first dibs on a negotiation.

It seems clear, though, that dude's ready to move on if he doesn't get exactly what he wants, whatever that is.