Extreme Parenting with Tom Brady and His Frightened Daughter 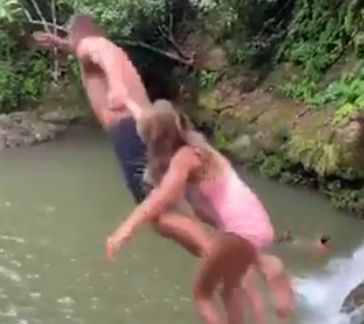 You know, we're beginning to think this Tom Brady character is a little unconventional, particularly in regard to his family.

The Brady Bunch has been spending some quality time in Costa Rica before the fraudulent Tom Terrific reports to yet another NFL training camp in preparation for yet another NFL season.

However, this wasn't exactly rest and relaxation, as Tom, Gisele and the kids decided to push the vacation envelope with a variety of activities.

My manager: Don’t do it man, that song is dead, we can do better.

It's unclear if the machete was provided or if Brady brought his own, but he was definitely wielding it with his throwing hand.

That was just the appetizer, though.

This would be the main course, served with a generous helping of batshit crazy:

What in the actual hell was that?

While that may or may not be Brady immediately after the jump, dude clearly isn't the most responsible or brightest dad we've come across.

That fall was ugly, which tends to happen when a six-year-old girl is yanked off a cliff facing by the arm against her will.

Reaction on the web was predictably harsh.

Anything for a selfie ...

Tom Brady DRAGS daughter off dangerous cliff after she hesitates before jump#DumbJock https://t.co/o8oh4PsTuH

The humanity.... He deserves a lifetime ban! Thst is child endangerment 101! TB12 ripped daughter arm out of socket while trowing her from a cliff to certain death on the rocks below... Luckily she missed the rocks and landed in the water.

The NFL policy on shitty parenting is ambiguous, but maybe Tom should've pulled Tyreek Hill over the side instead.

Tom Brady acted irresponsible and immature when he had his 6 yr old daughter jump off a cliff into the water with him in Costa Rica. He endangered the welfare of a minor and child protective custody should investigate this immediately.

While we're on the subject, this sadly calls to mind another example of eccentricity involving children.

Yeah, the optics on that one were pretty bad, as well.

As of press time, we've been unable to establish a link between this irresponsible cliff jump and the Max Kellerman cliff theory. 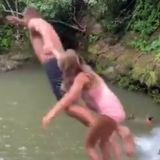 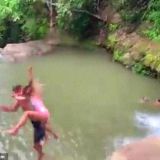