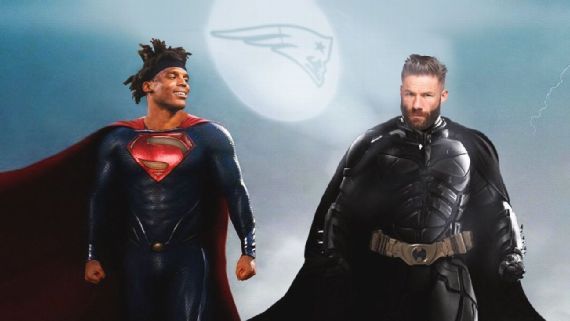 Beyond the general surreality of the upcoming NFL season, a veritable plethora of other fascinating storylines are about to unfold.

Of course, there's the absurd notion of Tom Brady in a Tampa Bay Bucs uniform after two decades with the Patriots.

You just can't make this shit up.

Quite frankly, though, something has gotten completely lost in the above madness.

We're referring to the thoughts and feelings of Julian Edelman, who will now be catching really short passes from someone other than Tommy Terrific for the first time in his scrappy career.

Actually, our bearded little friend is being awfully brave right now, attempting to make the best of the situation by bonding with his new platonic life mate.

And what better way to accomplish this than by engaging in some testosterone-fueled cosplay:

“The night is darkest just before the dawn. And I promise you, the dawn is coming...” pic.twitter.com/LbsSkqoGok

Now, Cam has clearly grown into the role of Superman over his decade in the league, so that part pretty much casts itself.

However, a gritty possession receiver assuming the persona of the Dark Knight is borderline delusional.

And we can only assume his dynamic with Brady had more of a Batman and Robin vibe to it.

If this was the case, then Tommy's portrayal of the winged avenger as a vapid, supplement pushing MAGA cultist was an interesting take on the character.

And we haven't even broached the subject of Bill Belichick.

Where does he fit into this vexing puzzle?