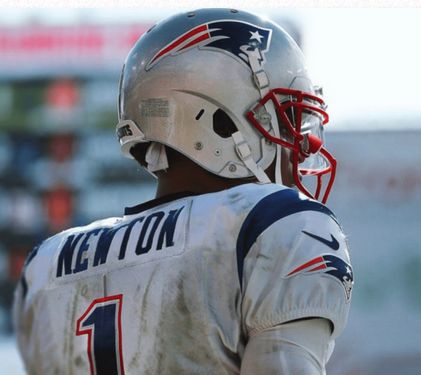 What's more pure than someone betting on himself to prove himself?

And what's more natural than Bill Belichick picking someone up outta the bargain basement bin?

Especially after the New England Patriots get jammed a third-round draft pick plus $1.1million as penance for that sneaky little video incident where their dude aimed his lens at the Cincinnati Bengals' sidelines.

Be that as it may, Belichick just acquired the services of an übermotivated Cam Newton for what amounts to a handful of magic beans:

It's been announced as an incentive laden deal that begins with a $1.05million base saary and could max out at $7.5million. Knowing the Pats, some of those incentives are likely to be winning the Super Bowl with only seven players on the field and finding a cure for Covid-19.

Assuming Brian Hoyer & Jarrett Stidham remain on the 2020 roster, even if Cam Newton maxes out the full $7.5M, the #Patriots will have only paid out $9M for 3 QBs. There are 19 QBs set to make more than that alone this year.

This season -- assuming it's played -- won't be about the money as far as Newton's concerned. He's angling for proving he's not a past-tense player and cashing in on it next year.

If he's indeed completely recovered from his injuries, stays healthy, and show he's still got what made him the 2015 MVP, then it'll be a win-win for both him and the Pats if they make the playoffs.

It'd be enough to make one wonder why New England has to think they need to cheat whenever possible. This is damn near legal cheating, but full marks to them for their financial prowess:

What's more, the uniqueness of what they do just keeps on coming ...

Another ridiculous part of the Pats signing Cam Newton?

Patriots are now the first team in NFL history to both lose and add a former MVP in a single offseason, according to @EliasSports

What's crushingly obvous to the AFC East is Belichick just picked up a dude who's now the best slinger on their roster. It's not often to see a QB go from warmed-over UFA to Week 1 starter, but Newton has every opportunity to do so, and there's no doubt he'll get every opportunity.

Norv Turner left lots to be desired as a head coach, but dude's a stellar offensive coordinator. What's more, he's got Belichick's respect. It's Turner who said that if Newton's healthy, he's still got it.

The Hooded One saw this for himself when Carolina, with the ex-Auburn Tiger at the helm, beat New England twice. Newton went 4157 (71.9%) while racking up 525 yards with six touchdowns and one interception.

As to past glories, dude still holds the NFL record for rushing TD's with 58. He's now in position to add to it.

There's no question, though, Belichick will style his attack so Newton won't be as susceptible to the number of hits he's taken over his first nine seasons. It probably won't take much, as his game plans have kept an immobile Tom Brady on his feet these past few years.

Now, with his latest move, he's got a shot at doing so again.

And if it happens, don't think for a moment, with Brady going Creamsicle, this wouldn't be his most satisfying season ever.