Jason Witten Becomes Unhinged on Sidelines during yet Another Dallas Loss 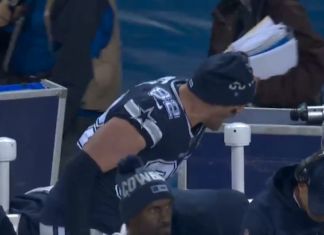 At the risk of pointing out the painfully obvious, the Dallas Cowboys are in a complete freefall at the moment.

Incredibly, they remain atop the twisted joke that has become the NFC East with a record of 6-7.

During their most recent nationally televised embarrassment Thursday night in Chicago, things really started to unravel.

Oh don't worry, he should be relatively calm by now.

However, that wasn't the case during the fourth quarter of their 31-24 loss to the Bears:

Clearly, his mask of sanity is slipping right off.

Of course, Witten did prominently display at least one identifiable human emotion, which in this case just happened to be rage.

He was also kind enough to articulate some constructive criticism to the coaching staff:

You know it’s all bad in Dallas when Jason Witten goin off🤬 pic.twitter.com/f1XYjX9vRG

The sad irony is that Witten would probably still be in the ESPN MNF booth if he had even approached this level of passion or interest in the game.

Instead of alternating between silence and confusion, the future Hall of Famer could've simply unleashed his fury on former broadcast partner Joe Tessitore while Anthony MacFarland remained in captivity aboard the BoogerMobile.

Tragically, this alternative reality isn't to be.

Just for the record, this is still the most interesting thing Jason Witten has done on or near a football field.

The man is an artist.