Gronk Dresses Like Someone's Arch-Nemesis during the Fox Halftime Show 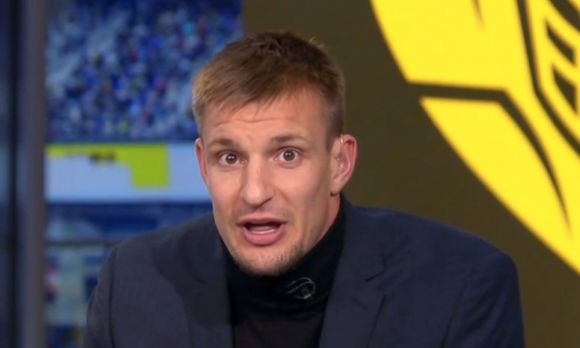 Well, the Gronk on Fox Sports experiment has been every bit as entertaining as we'd hoped.

The ex-Patriots TE and accomplished bro has proven to be delightfully awkward in the role, which is precisely what we expected.

Last Sunday during the tussle between Dallas and New England, the suits at Fox predictably plugged in Gronk to discuss his former team in the studio.

This is exactly what he did -- to the best of his ability anyway -- but our focus will be on his wardrobe.

You see, Gronk made a rather unconventional choice for his big studio appearance:

Gronk & his turtleneck.
"Coach Belichick is making you go out on that practice field & making you show up on time even if there is a blizzard at 7am. If there's a little rain in Dallas ,a little snow in Dallas Jerry Jones is coming down "Do guys want practice in the bubble." pic.twitter.com/4BQ3b5uOtV

That little rant was surprisingly coherent, even if it featured his signature wide-eyed bewilderment.

But that was definitely a turtleneck under dude's suit jacket.

If not for the football context, we might have assumed that Gronk was attempting to explain his inability to secure sharks with laser beams attached to their heads for his boss.

Of course, Gronk in a turtleneck was manna from heaven for trolls far and wide:

“Actually, I threw him out of the jazz club.” pic.twitter.com/Feu83tuzb5

the look of a man on two hours sleep who’s about to give a nuptial-cancelling best man speech pic.twitter.com/ZkPuW8Ucth

Gronk looking like a frat boy with an art degree pic.twitter.com/oRGEryXbrP

While those are top-shelf, here's your winner:

We look forward to seeing that very same expression in the studio this coming Sunday.