The Retired Rob Gronkowski Gronks All Over the Lombardi Trophy 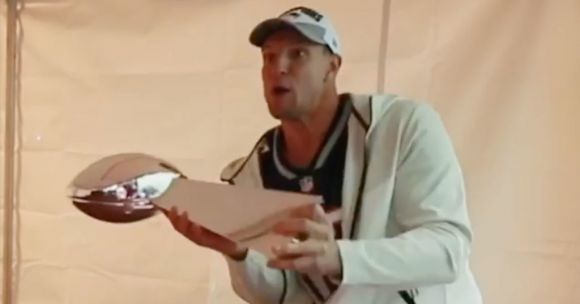 An entire football nation wept openly when Rob Gronkowski announced his retirement from the NFL at the ripe old age of 29.

But fear not, because the lovable goof is still gronking in public.

The now-former New England Patriots TE was part of a spirited team celebration at the Red Sox home opener back on 9 April.

Of course, that was almost two weeks ago, but the sordid details have only recently surfaced.

OK, you've been patient, so let's have a look:

That retirement life is different

As you can see, Gronk is still in vintage form.

He sure is, but we dig him anyway.

Perhaps it was unrealistic to expect someone like Gronk to follow any sorta protocol in relation to the Lombardi Trophy, but in his defense, that was a fundamentally sound bunt he laid down.

The Patriots organization doesn't seem too concerned about it, even sneaking in a pompous reminder of their nauseating dominance:

.@RobGronkowski left a mark on this organization.

And on the sixth Lombardi. pic.twitter.com/t5IVTyCXcA

The future Hall-of-Famer reportedly tried to fashion the sacred trophy into a makeshift bong before using it as a bat.

You know, for the glaucoma.