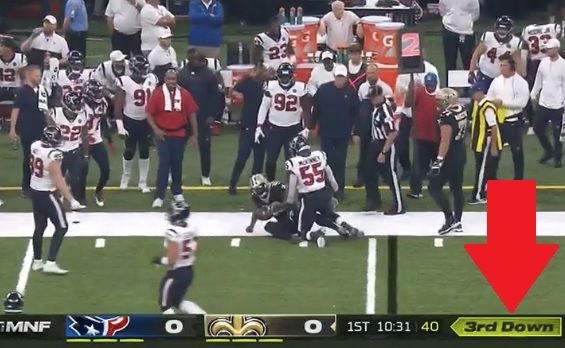 In the world of television graphics, sometimes less is more.

It's also wise not to overthink things too much or ignore the obvious, a lesson ESPN sometimes fails to grasp.

For reasons we're still struggling to comprehend, the sharp minds on board the Mothership decided to make their Monday Night Football down-&-distance graphic penalty-flag yellow.

Looking at ESPN’s yellow downs counter trying to figure out if it’s a flag or just the next down pic.twitter.com/VXybMW1rWf

Like 80 percent of my timeline has complained about the ESPN down and distance marker being bright yellow and therefore looking like the usual graphic for “the ref threw a flag” and I really have no idea how multiple people looked at that and approved it.

RT this if you want @ESPN to change the color of the down and distance graphic on MNF.

We must stop this horrendous yellow penalty flag pump fake.

Social media frequently nurtures our worst instincts, but every so often it can do some genuine good.

The Worldwide Leader accepted the criticism and acted accordingly, removing the confusing yellow graphic at halftime as tense Saints and Texans fans let out a contented sigh of relief.

Breaking: ESPN is switching away from the new Down-And-Distance graphic it debuted in the first half of Monday Night Football. ESPN heard the fans’ feedback and acted, quick.

Our ESPN production team is aware of the feedback on the #MNF down and distance graphic. We have called an audible and adjusted for the 2nd half of #HOUvsNO and for the #DENvsOAK game to follow. New look pictured here. pic.twitter.com/SWLKKuW87w

The difference is striking.

A look at the before and after Monday Night Football down and distance graphic. ESPN heard viewer complaints and made a change pic.twitter.com/MM0g6GgllH

The short-lived graphic will be appropriately mourned.

It didn't quite have the staying power of a BoogerMobile or Jason Witten's broadcasting career.