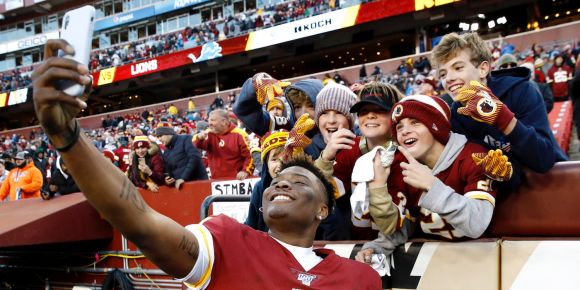 Life was just so much simpler back when Joe Theismann was in his prime.

For example, the single-bar facemask was still a thing and every single human on the planet didn't have a mobile phone fused to the side of their head.

Joe clearly longs for this time, as his public scolding of Dwayne Haskins makes abundantly clear.

Last Sunday, the beleaguered DC rookie slinger somehow managed to win his first NFL game despite the gaping holes that litter much of the Redskins roster.

Sadly, there was a bit of manufactured controversy afterwards, as Haskins was a little preoccupied as the clock expired:

Dwayne Haskins takes a selfie with fans while Case Keenum has to do the victory formation pic.twitter.com/Y76AL2cquF

Predictably, this youthful exuberance has become a thing, although you could argue that it was done so that backup Case Keenum could enjoy a victory formation one last time.

However, the crotchety Theismann didn't want to hear it:

How do miss the last snap of a game because ur taking selfies. That’s unprofessional & wrong.

Joe really needs to get a grip.

Perhaps the 70-year-old anti-selfie lobbyist is rethinking his decision to allow Haskins to wear his precious No 7.

Meanwhile, one of the lucky fans in question certainly seemed to appreciate the experience:

"I feel like Haskins was doing the team and the NFL a huge service by making that connection and reestablishing that bond with the fans."

-The fan who took a selfie with Dwayne Haskins https://t.co/lh6P6moGkZ pic.twitter.com/9aSeclSXxo

Others appear to agree:

People really trying to tear Dwayne Haskins down because he took a selfie with fans before the game was over and missed one snap? Let that man enjoy his first career win in the NFL. pic.twitter.com/ACgzA1kNGk

Clearly, the Redskins have more pressing matters to concern themselves with, anyway:

What does that tell you redskins fans?

This operation is the envy of the league for a reason.