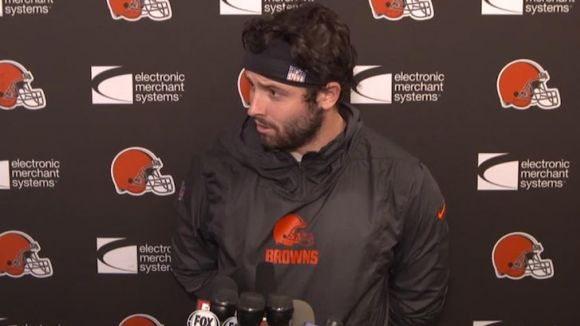 The Cleveland Browns represent one of the more talented dumpster fires we've come across in some time.

Of course, there are myriad reasons for this dysfunction, including the complete lack of discipline under the watchful eye of an out of his element Freddie Kitchens.

However, TV pitchman Baker Mayfield is definitely feeling the burden of expectations these days, with his turnover-heavy performances under constant analysis.

Things didn't go terribly well in a recent loss to the undefeated Patriots, as Mayfield was sacked five times while failing to break 200 yards through the air.

Dude only tossed one pick, but it was pretty grim:

Baker Mayfield no interceptions was +200 and THIS is how I lost my lunch money this week pic.twitter.com/dLDBtbvjIo

And underhanded, no less.

Anyway, frustrations boiled over during a session with the local media this week:

Baker Mayfield got into a heated moment with a reporter and walked out of his weekly press conference. #Browns pic.twitter.com/lSGxos3Ce8

Although that follow-up question by his apparent arch-nemesis Tony Grossi wasn't all that bright, the young QB really needs to show more maturity in that situation, particularly since he'll have to speak to these people again.

Everybody wants to hear the truth until they actually get it.... I am who I am and always have been. Don’t call it emotional when it’s convenient and then passion when it fits. I care about winning, so yeah I’m frustrated. If I was to act like it’s okay to lose, then y’all would

say that I’ve gotten complacent. My sense of urgency is at an all time high. And if I offend anybody along the way... that’s too bad

Again, while not necessarily wrong, a little tact would've been nice.

Here's some feedback from the unwashed masses:

Unbelievably childish act just pulled off by @bakermayfield...when things are going wrong you are suppose to be the leader of the team. Take the question and handle it like a superstar. This Tony Grossi feud is just going to far.

I didn’t even have to confirm @TonyGrossi asked the question to know it was him. @bakermayfield is a punk kid who has no respect for Tony. Yea - Tony is a pain in the ass but he’s doing his job. Grow the hell up Baker. You’re acting like a dumbass. #browns

We have a consensus.