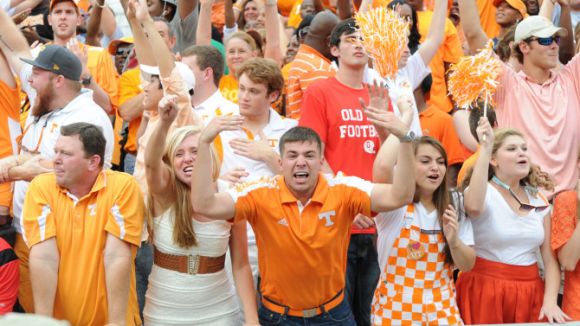 It might be time to start discussing options regarding the University of Tennessee football program.

We're well beyond the intervention stage at this point, but measures do need to be taken soon.

After making a mockery of the sport during their non-conference schedule, the laughable Vols are now two games into the SEC slate, which is as bad as it sounds.

But this crew seemingly isn't content with simply sucking out loud.

Oh no, dudes are now pretending to have a chance, if only for a moment.

With the No 3 Georgia Bulldogs in town, the Vols decided to give a shit for a while, actually taking a 14-10 lead early in the second quarter.

Now obviously, this surprising development pleased a fanbase that's already suffered the tortures of the damned five games into the season.

Look at these poor souls after a Volunteer does something positive:

Jauan Jennings IS A MAN AMONG BOYS💪🏻#Tennessee #Georgia

Sadly, this only accomplishes one thing, which is creating the illusion of hope.

The Bulldogs proceeded to gather up these feelings and set fire to them, scoring 33 unanswered points to win 43-14.