Jim McElwain Seems Genuinely Happy to Be at Central Michigan 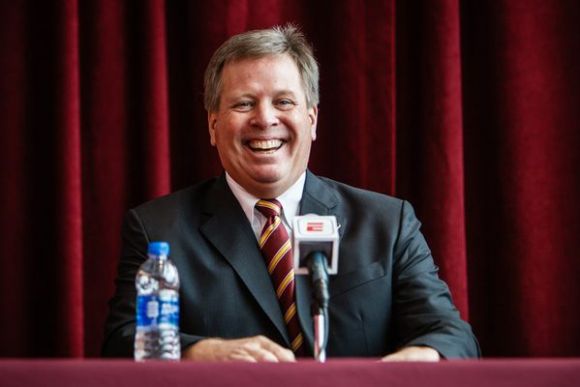 With football season nipping at our heels, this might be a good time to check in with some first-year coaches.

Anyone who remembers the flaming diaper pail that was his brief tenure in Gainesville may still be puzzled by this fact, but it's been sourced and corroborated.

Big Jim remains the new head coach of the Chippewas.

It's true, and we can prove it.

As part of the exhilarating MAC Media Day recently, our good buddy discussed his new gig in some detail:

That's amazing stuff, especially the part about choosing Central Michigan, as if dude was being courted by other programs and a bidding war had broken out.

He wanted to be a head coach again, and as such, would've accepted a position at Jupiter Tech, or even another solar system, if necessary.

Things did get rather ugly at the end, not to mention that unfortunate business with the shark.

Oh, and there were also those vague accusations of death threats by a person or persons unknown.

Anyway, the benevolent and possibly mad Jim Harbaugh tossed his pal a lifeline by putting him in charge of the Wolverine wide receivers, probably figuring a position coach couldn't do much damage.

McElwain promptly rewarded him by leaving after 10 months.

It's unclear if McElwain will be allowed access to the local aquarium, but he'll probably be monitored in some fashion by school administration.

Who is this man? Please RT, find him & ask him why he did this? Where is the humour in humiliating slaughtered animals? @ChrisGPackham pic.twitter.com/uHN37OywCx

Look, it really wasn't him.