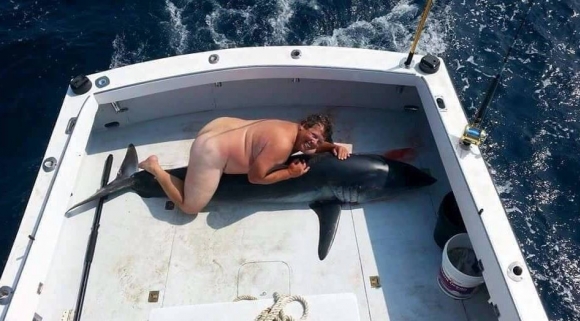 This is the gift that keeps on giving.

A photo of a naked man physically mounting a shark in a boat has become one of those viral sensations the kids like to talk about.

While the shot is troubling enough without context, the man in question bears a striking resemblance to University of Florida head coach Jim McElwain.

As amazing as this would have been, McElwain isn't the man in the photo.

Yep, there he is.

The reason we know McElwain isn't the guy is because he was actually forced to address the situation publicly.

This is akin to the old political maneuver of making up some outlandish lie about your opponent and forcing him or her to deny it publicly.

The result is people will forever associate the individual with the lie, regardless of whether or not it's true.

This could well now be the case with McElwain and shark pornography.

There are reports that the man has been identified and wanted to meet the beleaguered Florida coach, so we shall see where this wonderful story takes us next.

In the meantime, we should examine the specificity of this shark fetish and the nature of our relationship with animals in general.