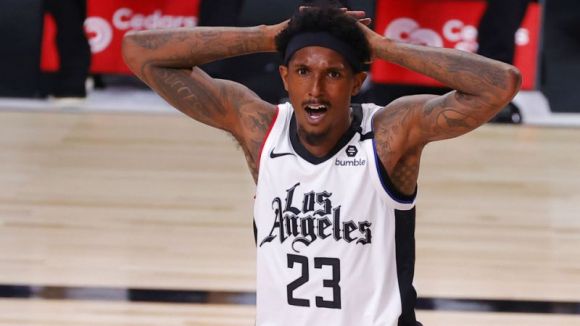 In the midst of a global pandemic, the only practical possibility of staging any semblance of a pro sports season is keeping the players isolated.

This sobering reality has spawned the NBA bubble, ironically located at Walt Disney World in Orlando, which at the moment is most certainly not the happiest place on Earth.

But while this bold experiment seems to be going much better than MLB's woefully misguided attempt at a season, these dudes need a release from their captivity once in a while.

This brings us to Lou Williams.

The Clippers' veteran guard recently emerged from the bubble with permission to attend his grandfather's funeral.

Afterwards, Lou decided it might be a good idea to stop off at one of his favorite Atlanta nightspots, which just happens to be the Magic City Gentlemen's Club.

And how exactly do we know this?

NBA Clippers star Lou Williams is being investigated by the NBA for leaving the NBA bubble after Jack Harlow posted a pic with him at Magic City Strip Club in Atlanta Thursday night👀😂 pic.twitter.com/yyVICg8siM

Yep, his pal Jack shared a photo with the entire planet, only to delete it almost immediately.

Hold up Jack Harlow got Lou Williams caught up 😂😂😂😂😂😂 pic.twitter.com/96P27F6bsl

Sure champ, we believe you.

But the plot thickens.

According to Lou, he only stopped in for some eats, because strip club food is the best.

While we have no visual evidence of Williams pelting dancers with food, he apparently dropped by for a very specific menu item.

Clippers guard, Lou Williams was most definitely in Magic City for the wings.

It's unclear how often one has to frequent a joint before having a menu item named after them, but clearly, Lou meets the criteria for his signature Lemon Pepper BBQ Wings.

There's nothing quite like a good piece of whitefish.

Now you might be thinking that Lou's full of shit, but we have it on good authority from Johnny Manziel that those chicken wings are indeed the best he's ever had.

As a result of his ill-fated Atlanta field trip, Williams has just begun a 10-day quarantine and will likely miss the Clippers' first two games, but the mere thought of those chicken wings will surely provide comfort.

I totally get it Lou Will. pic.twitter.com/OwFTQQdAJt

Dude did the right thing.