Trevor Bauer Impersonates an Unruly Toddler on the Mound 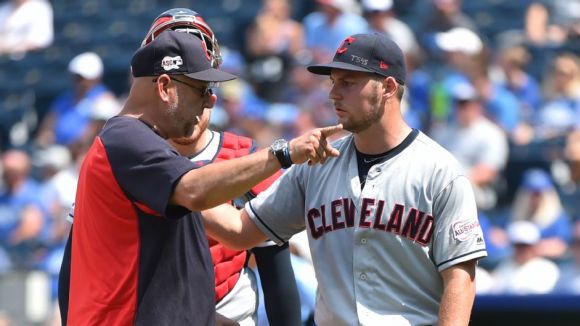 Something appears to be very, very wrong with Trevor Bauer.

The volatile Cleveland Indians starter and rumored trade candidate was on the bump in Kansas City on Sunday when things went sideways quickly.

With the Tribe up, 5-3, the bottom of the fifth inning turned into a waking nightmare for Cleveland, but for Bauer in particular.

Literally every single action in the frame went against the drone safety advocate, as circumstances conspired to completely ruin his day.

We'll allow the lovely and talented Jomboy Media to narrate this shitshow for us:

You can almost see his dignity flying over the wall as well.

There's just so much happening in that clip that it's difficult to parse, but the greatest single thing might be that dude flinching when Bauer wheeled around to make his tantrum toss.

Oh, and also the fact that it looked like manager Terry Francona was grounding him when he pointed at the dugout.

Yeah, on second thought, that was the best part.

And here's champ explaining himself afterwards:

He does seem to realize how ridiculous he must've looked, and while there's no excuse for emotionally regressing back to kindergarten, that was a pretty brutal inning.

And of course, this isn't the first or last time a ballplayer will wig out in public.

Hey, at least the ladies still dig him, amirite?