Trevor Bauer Almost Bleeds Out on the Mound 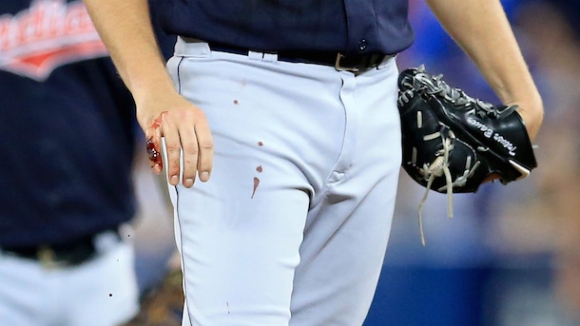 Game 3 of the ALCS between the Cleveland Indians and Toronto Blue Jays was fairly standard, only with more Wahoo red than usual.

Trevor Bauer -- who, if you may recal,l had destroyed his right pinkie while playing with his drone -- bled all over the mound in the first inning after the wound opened up. Dude was forced to leave the game.

This is bizarre on many levels.

The drone injury itself is very likely unprecedented for an MLB pitcher, although admittedly, the technology hasn't existed for very long.

Also, you typically don't see quite that much blood on the mound.

Some, yes, but not that much.

Indians' skipper Terry Francona even mentioned the blood-soaked rubber and admitted this was not a normal occurrence.

Bauer had suggested the pinkie would be a non-issue, but clearly, this was not the case.

Somehow, the Tribe pulled the game out, despite losing their starter in the first inning. They plunged deep into the bullpen -- tag-teaming six relievers -- including the magnificent Andrew Miller, and won, 4-2. That puts them up, 3-0, in the best-of-seven AL Championship series

For his handling of the situation, the legend of Tito Francona continues to grow.

Meanwhile, could someone give Bauer a hand before he passes out?