Trevor Bauer Would Like You to Please Sit Down 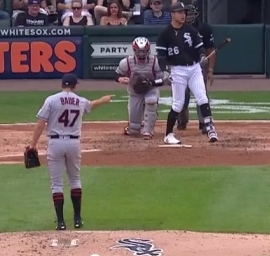 There's something intimate about the confrontation between a pitcher and a batter.

These little personal battles take place constantly during a baseball game, with all sorts of thoughts running through the heads of the participants.

Usually, these thoughts aren't verbalized, but every so often, we're treated to an entertaining exchange.

Like during a recent tussle between the Indians and White Sox:

It appears Chicago outfielder Avisail Garcia decided to get a little mouthy with Cleveland pitcher and drone enthusiast Trevor Bauer during an at-bat.

By all means, have a look:

Well, yes, he kinda does.

It seems Garcia felt like he was right on that first Bauer offering, which he fouled off.

Bauer, like most pitchers, would just prefer not to be shown up on the mound in front of thousands of people.

Garcia didn't seem quite as confident on his stroll back.

Of course, these two teams have played this game before.

You may recall the testosterone-fueled showdown between Ricky Vaughn and Jack Parkman years ago, which ended with Wild Thing fanning the White Sox catcher.

Oh wait, that was a movie.

Well, this is embarrassing.