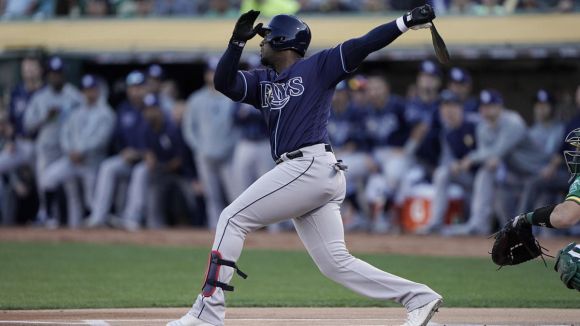 There's nothing quite like the drama of an MLB one-game Wild Card playoff.

Invariably, games like this will feature an unlikely hero or two who come up large in the pressure-packed moment.

Last night in Oakland, that man was Yandy Díaz, who missed half the season due to three separate IL visits.

The Tampa Bay infielder seems healthy now, though, cranking two solo homers, including one to lead off the game.

That's precisely what disgruntled A's fans would like to know.

Here's the lead-off jack in question:

A little oppo action to cleanse the pallette.

This would be No 2 in the 3rd inning:

Yandy Diaz with his second solo home run in the wild card! pic.twitter.com/6Nt6yOUOam

And before you ask, that wasn't a replay of the first homer, although we can understand the confusion.

At this point, Athletics' enthusiasts had seen enough.

Well, one fan in particular:

You'll want the sound on for a priceless reaction from an A's fan. pic.twitter.com/2QUr64Mhg5

The frustration in that woman's voice was palpable.

Her team was down, 4-0, and didn't seem to have a single idea how to retire Yandy Díaz.

The despair she was experiencing in that moment proved to be accurate, as the A's exited stage right, 5-1, to the Rays.

Of course, the reward for advancing is the privilege of being savagely penetrated by the Houston Astros, so perhaps it's for the best.