Jeff McNeil Collaborates with Safety Netting on a Spectacular Catch 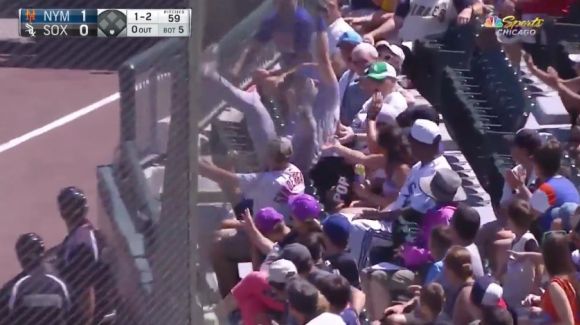 The Chicago White Sox were officially the first MLB team to display any evidence of common sense or decency by extending the netting at Guaranteed Rate Field all the way to the foul poles.

Apparently, they decided that waiting for MLB to go through parliamentary procedure in the off-season wouldn't be helpful to the next fan to get skulled by a speeding baseball.

However, when the Southside brass made this decision, they probably didn't have Jeff McNeil's safety or outfield defense in mind.

With the New York Mets in Chicago recently, their rightfielder decided to get really creative while chasing a fly ball into foul territory.

Well, it doesn't have to make sense, as long as McNeil accepts the consequences of his actions.

Somehow, with the extended netting still in its infancy,dude's already figured out a life hack for it by going full Spidey and diving right the hell into it.

The Flying Squirrel really did take an awful risk tangling with that netting, as these things don't always work out quite as well.

That's right, McNeil could've just as easily been mistaken for a mutant and captured by intelligent apes.

One more point about this netting, though.

While this is just the beginning, it seems like there wouldn't be quite as much give, as McNeil still ended up in the third row even with the limited resistance provided by the net.

They probably won't keep the bees away, either.

Apparently, the additional netting will be up in other ballparks fairly soon, so perhaps we could make them a bit sturdier if possible.